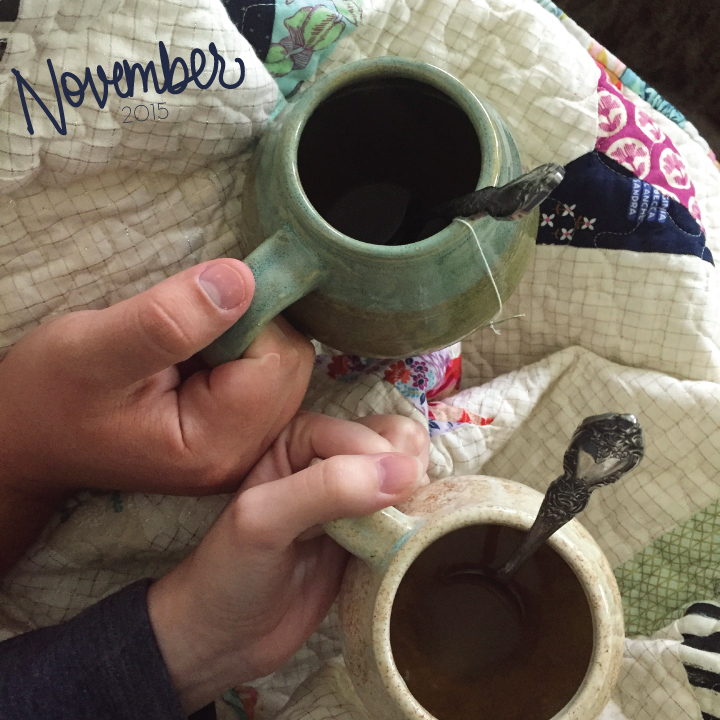 For the last year and a half I’ve been doing detailed “Life Right Now” posts outlining the happenings of each month. While I like that I have a record of those times and a place to put random things I’d like to share, lately, that super structured format has become too much. It has become a burden to make the time to sit down and do it and they end up getting done later and later into the next month each time. The last thing I need is another (insignificant) thing on my to-do list. In an effort to only keep things in my life that bring me joy while still sharing (with less pressure), I thought I’d skip the format and just chat with you about the happenings of November. (read more about past months in the links at the bottom).

The weather in New Orleans has been so crazy this Fall (and I think in many other places too). It has just been so warm! Usually October is an absolutely gorgeous month here with perfect 60/70 degree weather, but this year it was still hot and Summer-y (with temps consistently in the 80s). November cooled down slightly, but it has still been pretty balmy (which I’m not complaining about, November and into December has had awesome weather!). As it gets closer to Christmas (yes, I’m writing this in mid-December), it seems a little odd. But who can complain about amazing weather!? I’m still loving my new leather booties, even though I haven’t gotten to wear them a lot.

November was a super busy month at work preparing publications for the Advent season. Because of this, I was pretty exhausted by the end of the work day (although, let’s be honest, when am I not exhausted at the end of a work day?). I didn’t blog at all (except for my October recap) and stepped back slightly on social media. I also got a cold and was not feeling well for a week or two. Drew and I both got sick, but we did enjoy drinking tea together out of my handmade mugs! (photo above). I’ve been taking ceramics again (it’s more of an open studio time, there is no class instruction) once a week in Oct, Nov, and Dec, so I’ve enjoyed making more wheel-thrown mugs and bowls and such. It is so awesome to use something you’ve made for a practical purpose. I love painting, but the practical use of ceramics (and quilting) has me hooked. I also finished up the last bit of patchwork on my value quilt top (see it here). I wanted to quilt and bind it as well and have it ready by Thanksgiving (to travel in the car with it), but the fabric I wanted for the backing was out of print and wasn’t stocked online anywhere. I ended up tracking down a retailer in a shop outside Nashville that found it at a warehouse for me. That process took a while and I didn’t get it in until the day we were leaving to travel to visit family for Thanksgiving! So that is on the to-do for December (spoiler! I quilted it the second weekend in December and I’m waiting on my binding fabric to arrive any day now!). I also started planning ideas for another quilt, but I think I’ll wait a little while before I start another quilting project. I bought/ordered/made almost all of my Christmas gifts in November, as well as taking our Christmas card pics, designing and ordering our cards, and putting up most of our Christmas decorations, including some hand painted abstract ornaments I made this month. It was so nice going into December with most of that done!

The past few months (well, always really) I’ve been thinking a lot about my future as a surface pattern/textile designer and exploring ways to make that happen and to expand in that area, and exactly what it is that I want to do next in life. I’ve been working on some things and I can’t wait to see where I end up in 2016! (more on my goals for 2016 coming soon!)

November had many reasons to celebrate, including my friend Emma’s engagement party, a Friends-giving potluck with our 20/30s church group, and of course, Thanksgiving back in Illinois with our families. We brought a GF version of Cheesy Potato Casserole (or Texas Potatoes that my mom made growing up) to our Friends-giving, and it was the first time I’d had anything like it in years! I’m working on perfecting the recipe and when I do I’ll share it here. This month we’ve also made more everything cookies, a GF sawdust pie (my fave!!), homemade hummus, and we are loving making rice in our new rice maker (an upgrade that was LONG overdue!). While traveling for Thanksgiving, we were able to test run our new backpacks (mine, Drew’s) for our Europe trip next year (with packing cubes, a new smaller toiletry bag, and GoTubbs). We also booked our flights on Thanksgiving evening while everyone was Black Friday shopping! (YAY!!) I took advantage of Black Friday deals online to buy this Madewell bag (in the English saddle color with a gold monogram) I’ve been eyeing for a long time (Merry Christmas to me!)!

I’ve had my BKR bottle for over a year now, and use it daily (I seriously take it everywhere with me). While I love it and love drinking out of glass, I’ve had some issues with the cap and lately it has started to leak slightly. It isn’t a huge deal if I’m carrying it around the house or it is sitting at my desk at work, but I don’t want it leaking out in my bag while I’m on the go. I’ve been considering getting this S’well bottle. It seems more lightweight for traveling and is supposed to keep things cold for 24 hours and hot for 12! Anyone use one and love it?

Random, I know, but that’s what I’ve been up to this month. What about you?