Goodness, it has been a long time since I’ve shared cooking and food related things on here! I’ve still been cooking just as much, if not more, but just haven’t gotten around to sharing those tasty things. 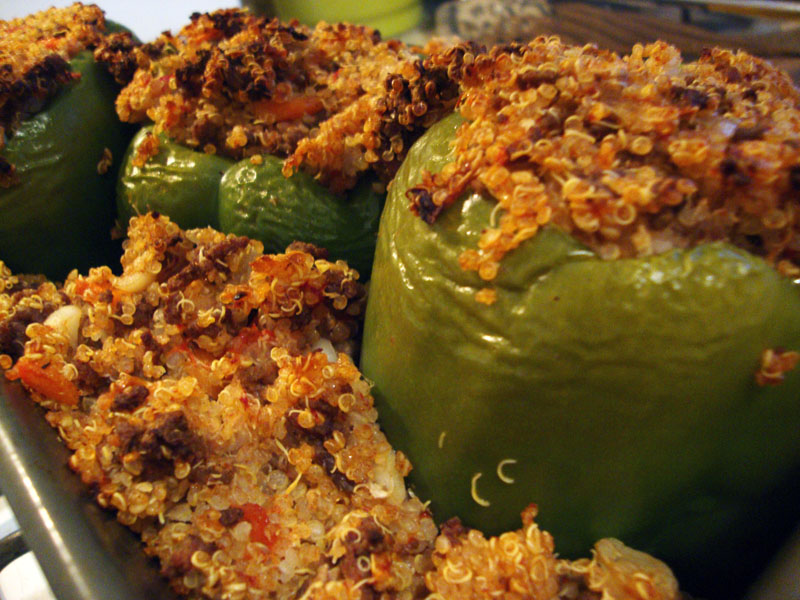 One night this week for dinner I made stuffed green bell peppers. There are many ways you can make them. My mom always made them with rice, I’ve had them with oatmeal before, and when I was visiting in France several years ago, my friend Anne-Nelly’s mom made them for dinner one night with Quinoa (she also made stuffed tomatoes, which are equally delicious!). If you’ve never used or heard of Quinoa before, it is a grain-like substance of little seeds, but when cooked is similar in consistency to rice or couscous. It is known for its nutritional value–high protein content, fiber, lysine and essential amino acid content, high in magnesium and iron and is gluten-free. It is great and easy in this recipe and is much healthier than using rice or oatmeal. 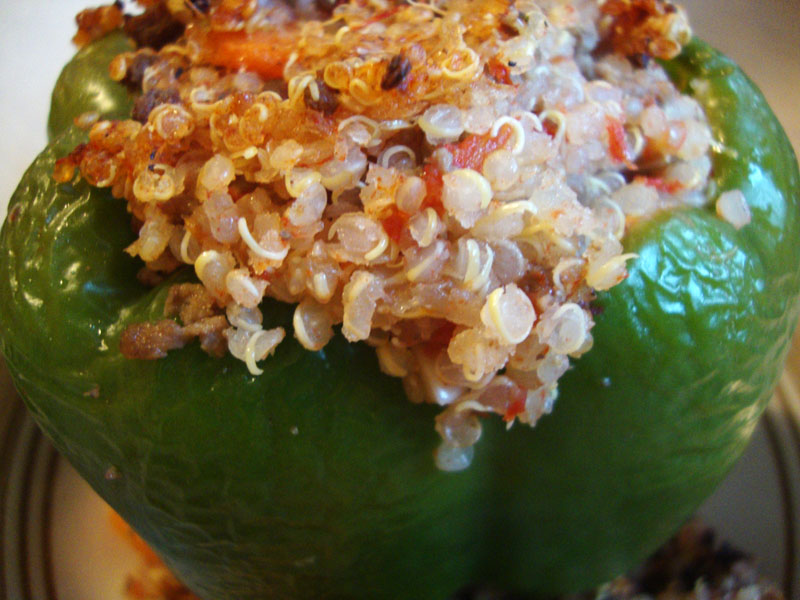 1. In a saucepan, combine 1 cup dry quinoa and 1 jar (mine was a pint, because that is what I had, but a quart jar would work as well–if I had it I would have preferred the extra tomatoes of the quart size) of home canned tomatoes. You need at least two cups of liquid in with the quinoa, so depending on how much liquid was in your tomatoes, you might have to add extra water. With a pint jar of tomatoes, I ended up adding an extra cup of water. If you don’t have canned tomatoes, you can also use a jar of crushed tomatoes that you buy from the store or you could just cook the quinoa in water and add fresh tomatoes into the rest of the inside mixture (I’ve also used tomato sauce or paste before and my mom uses ketchup). Cook according to directions on quinoa, but most likely you will bring them to a boil, then simmer for 10-15 minutes.

2. In a large skillet, brown 1 lb. hamburger (could also use ground turkey, sausage or whatever you prefer or leave out for a vegetarian option). Drain meat and add 1 onion, several cloves of garlic, and any chopped vegetables you would like (I added carrots to mine and the bits of green pepper around the tops I cut off) and cook until done. Also add salt, pepper, or other spices to taste.

3. Once quinoa is done, mix it in with meat and vegetable mixture.

4. Cut the tops off of your green peppers (this recipe should make 4-5 peppers, but I only had 3, so as you can see I had filling left over), place in baking or loaf pan and stuff peppers with filling mixture. You can also steam the peppers before baking if you want, but I’ve never done so. If you have extra filling, stuff it around outside of peppers in baking pan.

5. Bake in 350 degree oven for 30 minutes or so, until bell peppers are tender. You can also add cheese to the tops in the last few minutes of baking.

All due credit given to my wonderful older sister, Blair, for her yummy home grown and home canned tomatoes. Oh and also to Drew, who put the peppers in the oven and monitored them while I went to my Pilates class. That is also why they are a little burned on top! 😉