I’ve been parasailing multiple times. I went once in Panama City Beach, Florida with my dad when I was like 10 or so. I went again in Gulf Shores, Alabama when I was 12 with my little sister Jillian (who was 7 at the time) and again with in Perdido Key, Florida with Jacky, our foreign exchange student from Germany we hosted my junior year of high school. That time I was 16 or 17.

Every time I’ve been, I’ve found it to be relatively relaxing. You are secured well, so you don’t really feel like you are going to fall and you are up high enough that it is relatively quiet all around and you can just see out over the ocean and the shoreline and it is all really pretty. One time I went right before sunset and that was really neat to see from so far up.

That isn’t to say I’ve never had issues surrounding my parasailing adventures. The time that I went with Jill, my mom, dad, and Kelsey also went out on the boat with us to watch. We all had to wade out into the water (My mom and dad had worn their clothes and got soaking wet) to get on this little raft-boat thing. It was similar to those inflatable like banana boats that they give rides on at the beach. We rode that out farther into the water to meet the real boat that we were going parasailing on. However, in order to get on the real boat, we had to each stand on the wet, slippery, flexible, pool-raft type sides of the little boat and climb into the bigger boat. The whole time waves were crashing between the two driving them farther apart from each other. It really is a horrible way for the parasailing people to operate. It is much more difficult than it sounds. Long story short, my whole family got into the bigger boat and when it came time for me to get in, a huge wave came crashing between the two boats and I fell off and into the big blue ocean. Luckily I could swim and had a lifejacket on anyway. I swam up and then had to try the whole thing again and luckily made it into the big boat the second time. Then I decided to let the same idiot workers fly me hundreds of feet in the air behind their boat. Lovely.

Anyway, I figured that after parasailing those 3 times, my parasailing days were probably over. I had done it and had no real interest of doing it again.

This year on our vacation Kelsey decided that she wanted to go because she had never been before. Jill of course offered to go with her. Dad made the arrangements for them to go and then talked me into riding on the boat with them so that I could take pictures. We all went down to the parasailing place (a booth on the beach) and once we got there, dad realized that it would be the same price to send us all three parasailing as it would be to just send Kelsey and Jill and then pay extra for me to go ride on the boat. Plus they offered to take pictures with a nice camera for you. So what did I do? I went parasailing again. 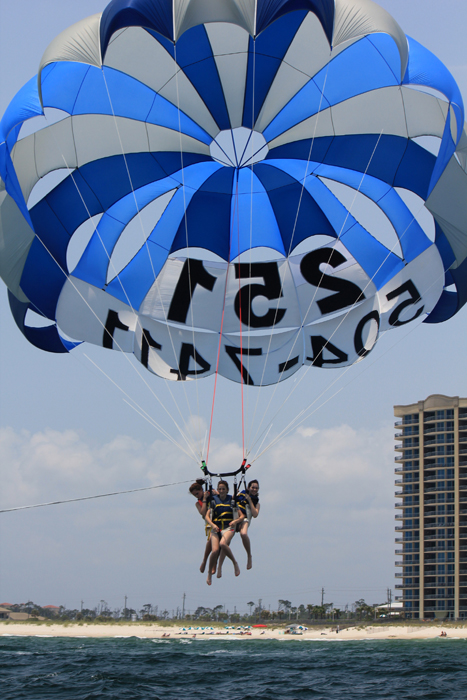 This time was oh-so-similar to the method used in my previous parasailing story, although this time we did in fact ride out on banana boats. We had to do the same boat-jumping technique and luckily no one fell into the water this time. We got out there and went out for a sail and it was the most uncomfortable thing I have ever done in my life. Never go parasailing with 3 people. We were incredibly smashed together with Jill in the front and Kelsey and I in the back. Jill seemed to have plenty of room, but Kelsey and I couldn’t even sit up straight. We had to lean slightly backwards the whole time and my back and ribcage still ache from the whole experience. Plus the wind kept swinging Jill back and forth in front of me, rubbing her scratchy harness thing all down my leg every time. My legs were all red and scratched up when I got off. 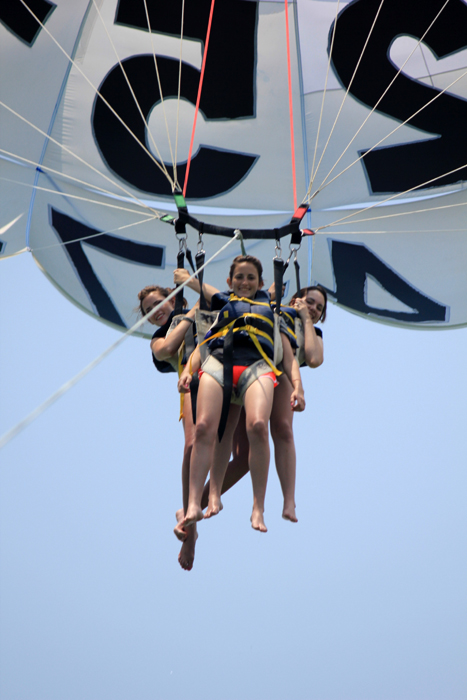 In addition to the uncomfortable position we were in, we were incredibly close to the shore. Like half the time we were floating over land instead of over the water. I had never done that before when parasailing, so it freaked me out a little. 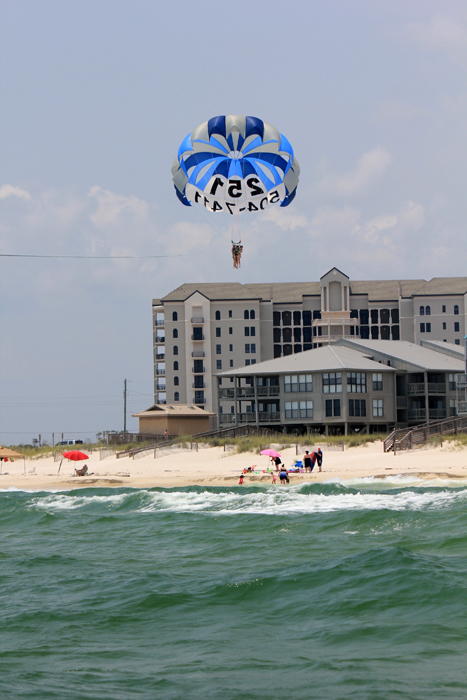 Not only were we close to the shore, but we were also close to the ground. It was a windy day so instead of the length of rope taking us higher up in the air vertically, it really only took us farther out away from the boat horizontally.  Therefore we were close enough to the people swimming along the beach that we had time for a nice little chat with them from the air. We got close enough that I thought we might just knock a few people over. There was this one little boy who started running away from us because he though we might land on him. Then they dipped us in the water. We were in shallow enough water that we could have stood up. 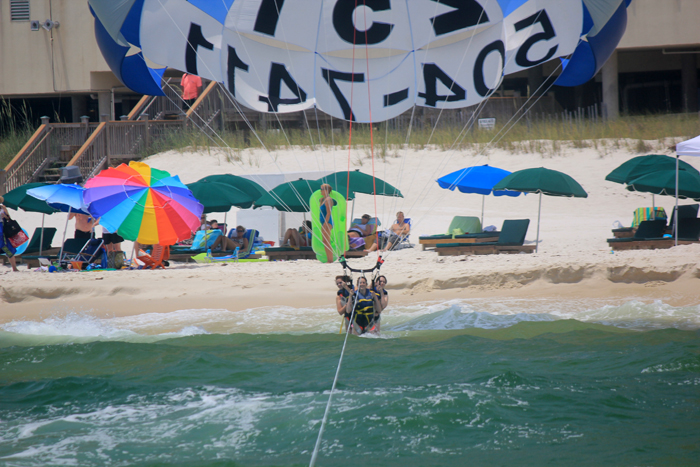 They told us that it would only be a 7-9 minute ride so we were praying for them to pull us in soon. I don’t know how much longer I could have held myself in that ridiculously uncomfortable position. Although it seemed like we were in the air forever and that they didn’t have any intent to bring us in anytime soon. Again which made me worry. Why had we been in the air so long? Were they having problems and they couldn’t reel us in? I guarantee we were in the air for at least 20 minutes. Finally they did bring us in, thank goodness. We found out when we got back that Dad had talked them into giving us a longer ride since there wasn’t anyone else waiting to go. 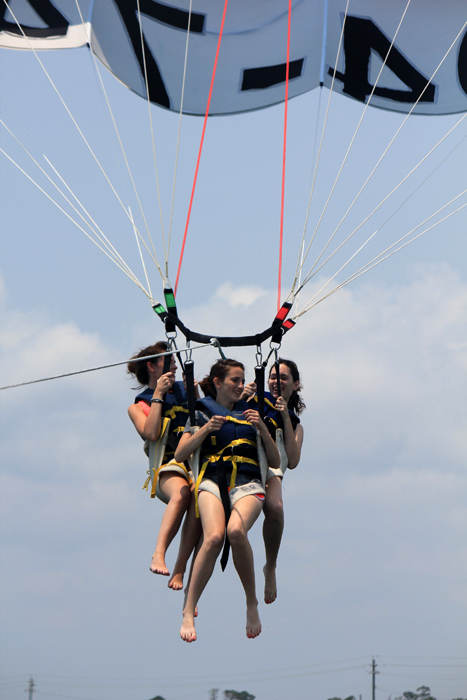 It was definitely a unique experience, although I think I would have preferred a more relaxing one instead. I don’t think I have any desire to want to parasail again. I think 4 times in my life has been plenty.