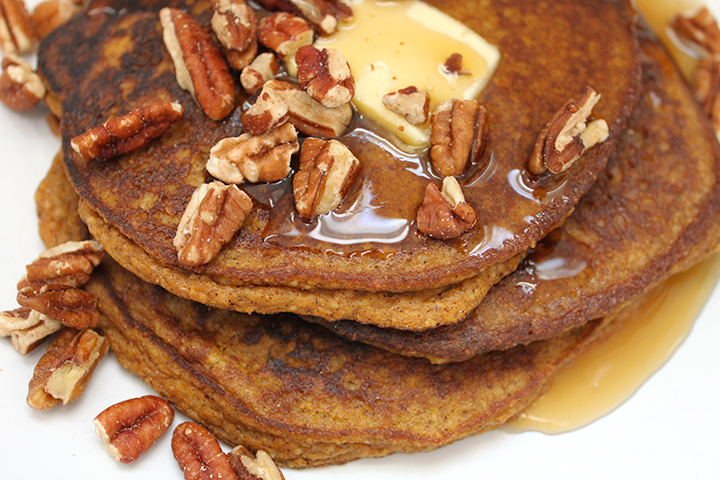 This is a recipe I’ve been meaning to post for a long time and have just never gotten around to it! It probably would be better suited to the fall when people go crazy for anything pumpkin, but I think pumpkin is perfectly suitable to eat year round (although, it gets harder to find!). Pancakes have long been an occasional weekend staple in the Rowland household, but a year or two ago, I decided to try my best to stop eating unnecessary carbs. Since there is literally nothing healthy about a traditional pancake, I stopped eating them. Since I generally stick to as much of a Paleo diet as possible, this is a great occasional weekend breakfast treat! (I usually drink green smoothies for breakfast every day, recipe here.)

Directions:
1. In mixing bowl, mix together pumpkin, eggs, vanilla, and maple syrup.
2. Add almond flour and combine.
3. Add spices and baking soda and stir to combine.
4. Melt coconut oil on an iron skillet or electric griddle.
5. Scoop out in 1/3 cupfuls onto griddle, spreading out slightly.
6. Cook on both sides until done (this will vary on temperature of your pan, I cook on a 350 degree griddle for a couple minutes per side).
7. Serve warm with butter, maple syrup, and pecans. A side of bacon and a cup of orange juice are also lovely additions!

P.S. This does make a lot of pancakes! I’ve made many half batches before, but I hate that a half batch only uses 1/2 a can of pumpkin, and I never end up using the other half for anything. So I’ve started making full batches and then reheating leftovers for additional breakfasts. If you’d rather make a half batch (5-6 pancakes) here are those measurements: 1/2 can pumpkin, 3 eggs, 1 tsp vanilla, 2 Tbsp maple syrup, 1/2 cup almond flour, 1 tsp pumpkin pie spice (or 1/2 tsp nutmeg & 1/2 tsp allspice), 1 tsp cinnamon, 1/2 tsp baking soda.

P.P.S. The original recipe that I started this from doesn’t call for the almond flour and I’ve made these many times without it. They are still great that way, however, they are really delicate and hard to flip without completely falling apart.