Some may call me a little old-fashioned. I actually had a teacher last year that asked me if I got lonely because I seemed to have ideals, that were no longer “ideal” in this world of ours.

In my American Literature class, we are learning all about post-modernism. That is, that we live in a post-modern world. A world of questioning and ever-changing identity. One that lacks stability because everything is constantly changing and we are constantly coming up with new solutions and new ideas on things. There are many things that I do agree with about post-modernism. But I wonder if things are starting to move away from it? Or maybe we are on the brink of a new time.

Because of the lack of stability in our world, I think that has lead many people to search for stability. To rely less on our ever changing economy and be more dependent upon themselves.

For example, I’m a big believer in old-fashioned, natural, organic, simplistic, down-to-our-roots kind of living. I want to grow my own vegetables in my garden, live in a old farmhouse with a wooden barn, have farm animals, use organic remedies and rely less on modern medicine, be creative, sew, be a do-it-yourself-er, and in general, try my best to make my own little world that is mostly dependent upon my own hard work, and less on the unreliably of our society today.

Today in society we are all so reliant upon someone else doing everything for us and us just being able to go to the store and get whatever it is that we need. What happens if something in that system changes? Will we know how to cope? I wonder what percentage of people in the world would even know where to start to grow their own food? (I even wonder sometimes if people even know what vegetables are anymore. I’ve seen people that live solely off of cereal and processed foods!) What about being able to make your own furniture? Build your own house? Make your own laundry detergent? Sew your own clothes? Find the natural remedies to help aches and pains? These are things that our grandparents or great-grandparents used to do on a daily basis. The people that know how to do things like this are mostly not around anymore. We need to not forget our roots.

I thought that I was one of the few people that seemed to value things like this. However, lately I have been really into blogging and found that there are many other people out there that also have similar ideals, even if they aren’t exactly the same as mine. 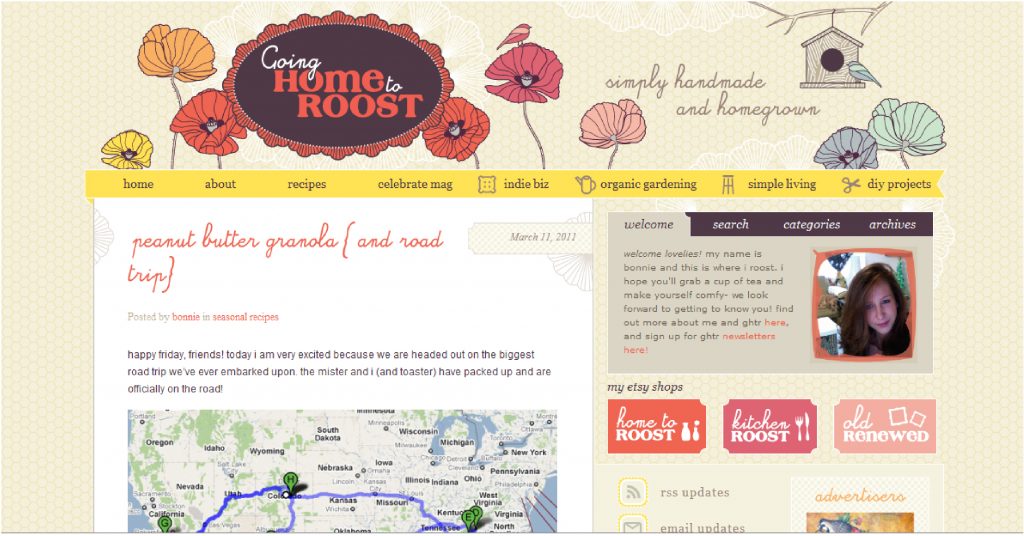 Going Home to Roost is a blog I stumbled across the other day. She shares her tips on simple living, organic gardening, raising chickens, cooking, and normal everyday stuff. A lot of the things that she is interested in are very similar to my interests. The Pioneer Woman shares similar stories of her encounters as well. There are many blogs out there like this, and many people that don’t have blogs that live like this too.

I was just reading Young House Love this morning when I read this post. It is all about bringing stodgy back. Stodgy meaning old-fashioned. You need to check out this video. Read about Stodgy is Sexy’s About. Here is an excerpt from Stodgy is Sexy’s about statement:

We live in conservative times. Cars are getting smaller, less flashy, and more fuel-efficient. Slender and pale is in, muscled and tan is out. Sport jackets have made a comeback for men, as have dresses and hats for women. With our economy in ruins, Democrats and Republicans fight to prove who is more fiscally conservative. A recent survey revealed that, for perhaps the first time ever, a majority of young people say they are more attracted to brains than beauty. Suddenly, boringly sensible is the new sexy. In a word:

Prudence, modesty, and stability may be boring, but boring is something we can trust in a turbulent world. Maybe that’s stodgy. But at this moment and for the foreseeable future, stodgy is sexy.

They have an interesting project going on. It does make me wonder if the post-modern world is slowing moving into another one. The nice thing about our world is that it is modern. There are lots of great conveniences. Which make it so much easier to incorporate old-fashioned values into your life in your own way. People wearing vintage clothing, caring about the environment, building things and renovating themselves, growing your own food, being less wasteful etc… There are tons of little old-fashioned things that are coming back into style. I guess only time will tell if this is a change in values or just a fad. I’m curious to see. 🙂