Goodness, I haven’t posted much this week! That is unusual for me lately! The last couple weeks have been insane for me and last week was no different. I had several midterms and so much to get done before the end of the week, mainly because now I’m on SPRING BREAK! Whoohooo! I’ve never needed a break more in my life. Its also a pretty exciting time here in New Orleans because Tuesday is MARDI GRAS!

For most people in the world, their idea of New Orleans doesn’t exist without some idea of Mardi Gras. It is a pretty fun time here, with all the hustle and bustle and the people and parades and king cakes and beads and the list goes on and on. It is an event that you can pretty much make what you want out of. The parades are super family friendly and there are all kinds of people there. People from all over visiting, locals, kids, older people, drunk people, sober people, everyone. The floats go by and everyone crowds around shouting and grabbing for the beads, cups, tokens, whatever the parade krewe is throwing out. It is most definitely a contest to see who can get the most beads.

They have bands and dance groups in between all the floats, so it is a loud, exciting party of sorts. In the neutral ground (the median basically–in between the two parts of the road), there are people that camp out all day saving their places and they put up big tents with grills and they sit outside and barbecue all day. I’ve seen people that move couches and recliners out there and basically set up their whole living room in the neutral ground. Yesterday on the way to the grocery store, we drove down one of the streets that is used in one of the bigger parade routes, and there were people building a deck on the side of the road, so that they could stand up higher when the parade came through and get more beads. Obviously, people get really into it.

Drew’s parents came down on Wednesday to stay for the weekend. They like going to every single parade. I think that parades are fun, but they are basically mostly all the same and so I like to go to a couple each year, but I don’t necessarily want to sit outside all day saving spots for every parade. Last year, we decided that we wanted to get lots of beads so that we could decorate our Christmas tree with them, so we were on a mission to get lots of beads. Now we have more than enough for our tree, and there really isn’t a whole lot of use for a million beads outside of Mardi Gras time, so I don’t care as much about getting a ton of them this year. Originally they threw out glass bead necklaces (before they started making a ton of cheap ones in China) and the glass ones are really cool. Some of the parades throw out a couple of glass beads each year, so that is always a neat thing to try to catch.

On Thursday night, we went to my favorite parade–Muses. Most of the parades basically all have political themes (except for some of the kids parades with fairy tale themes), and Muses does somewhat, but it is a super girly parade. They have mostly girls on it, all dressed up and they throw out high heels. High heeled shaped beads, necklaces, bracelets, all kinds of high heeled stuff. Every so often, they even throw out glittery decorated real high heels. It is pretty fun. They also throw out the typical plastic cups, pink frisbees, glowing necklaces, etc… I even caught a package of Muses silly bands. 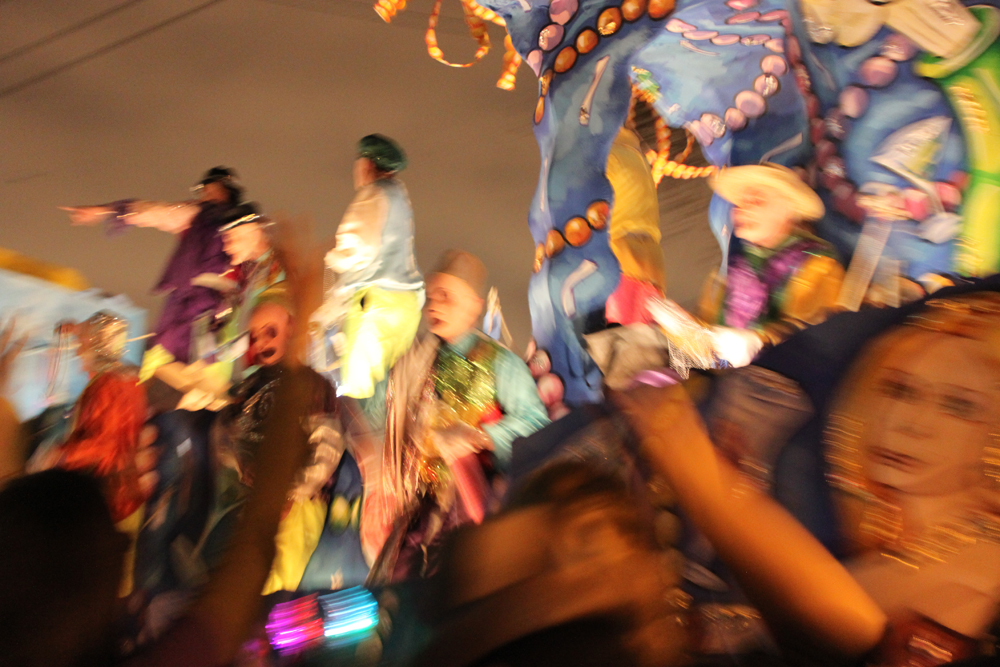 This was the parade before Muses. It is like most of the other ones, with men dressed up like clowns or something in the krewe. 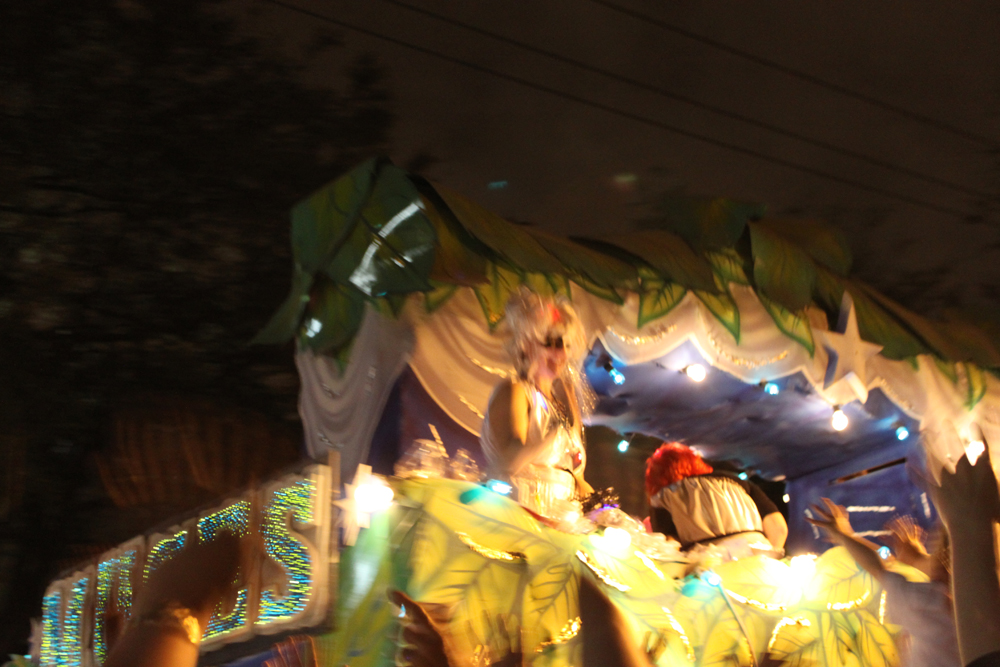 Here is the start of Muses. See, much prettier. 🙂 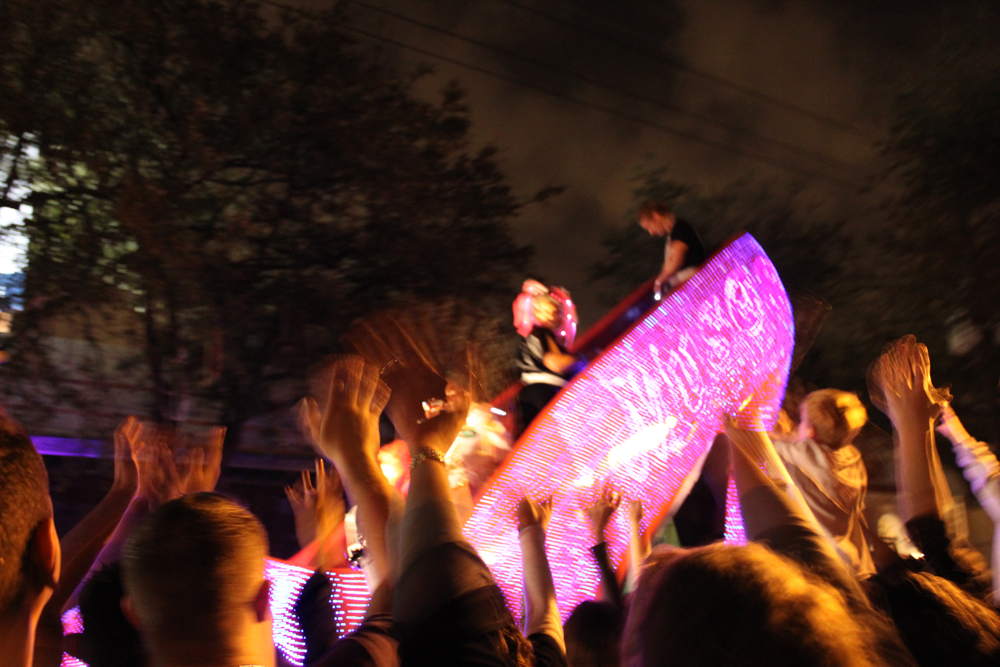 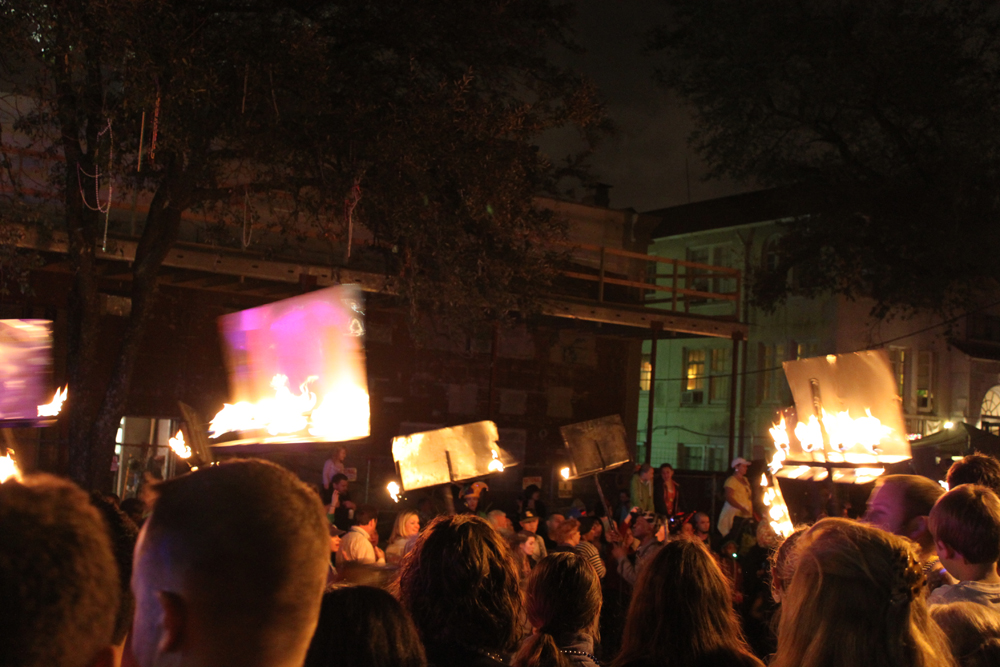 They are hard to see, but these are the Flambeaux. They are men that carry these torch-like things in between the floats. It is basically just tradition. Back in the day, this is how they lit the whole parade. Here, is more on them. 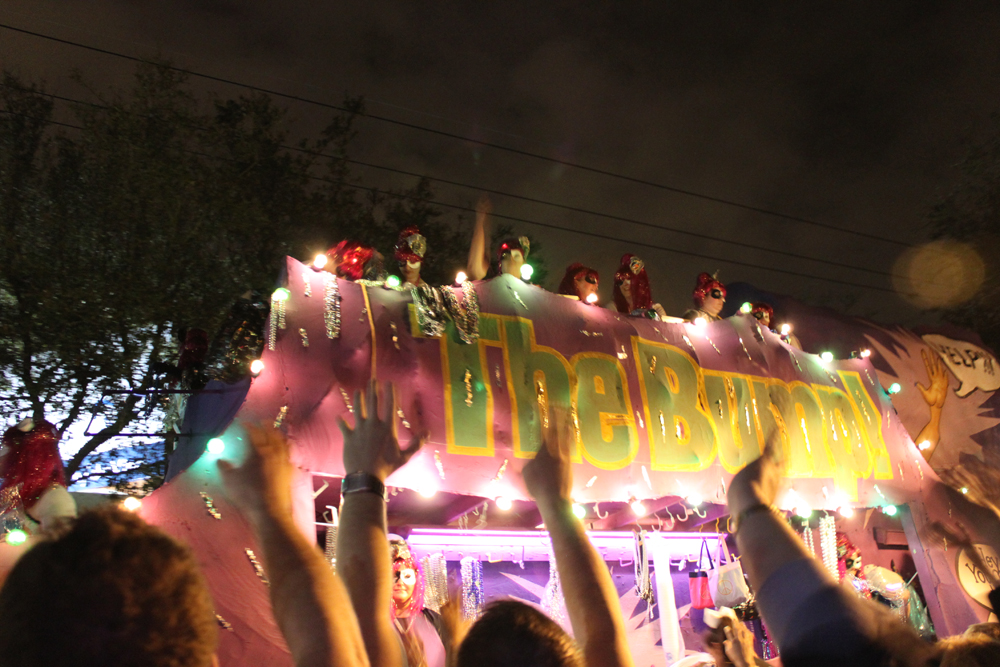 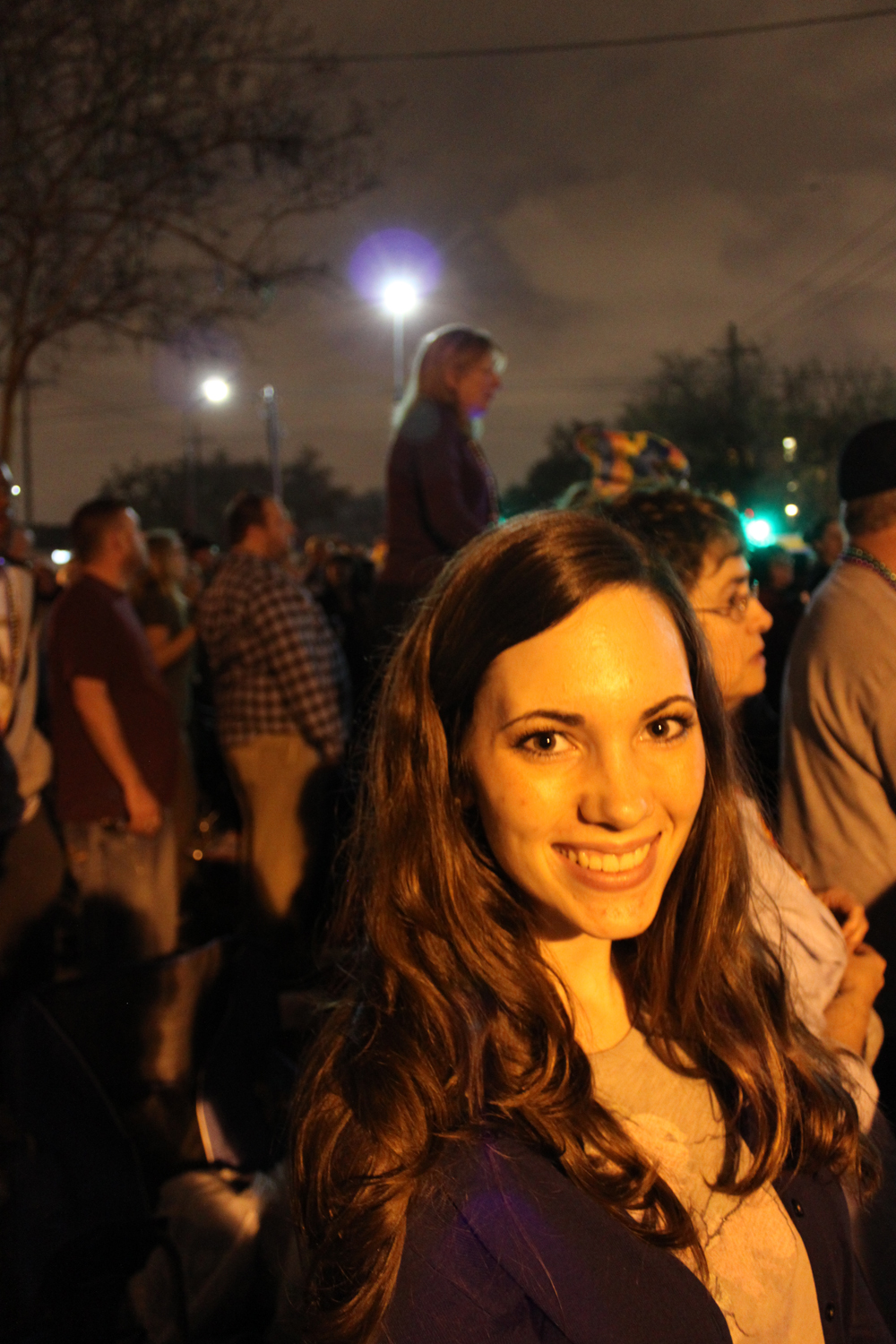 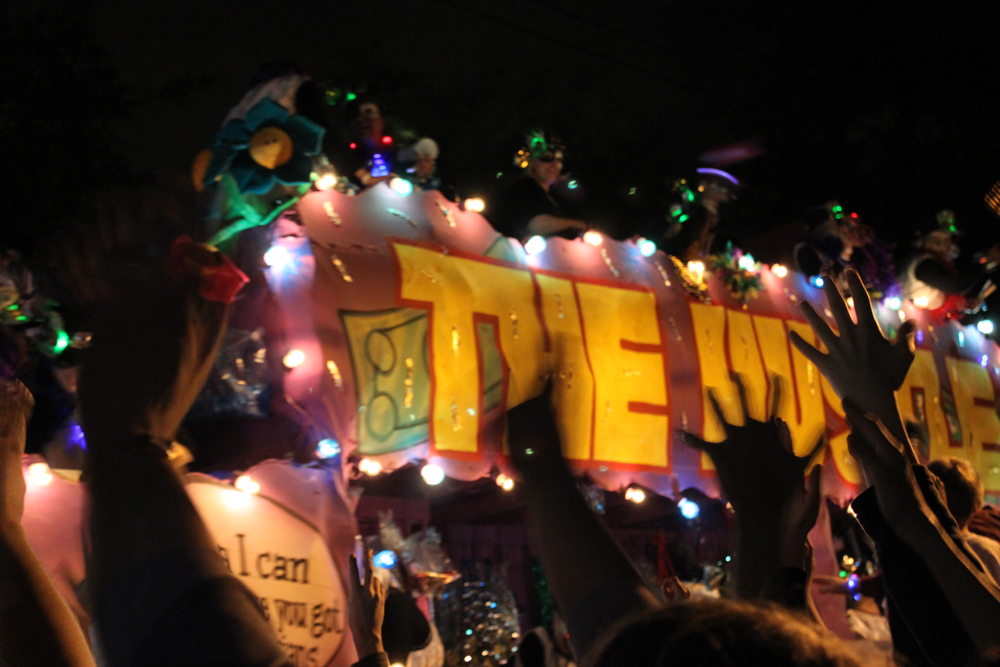 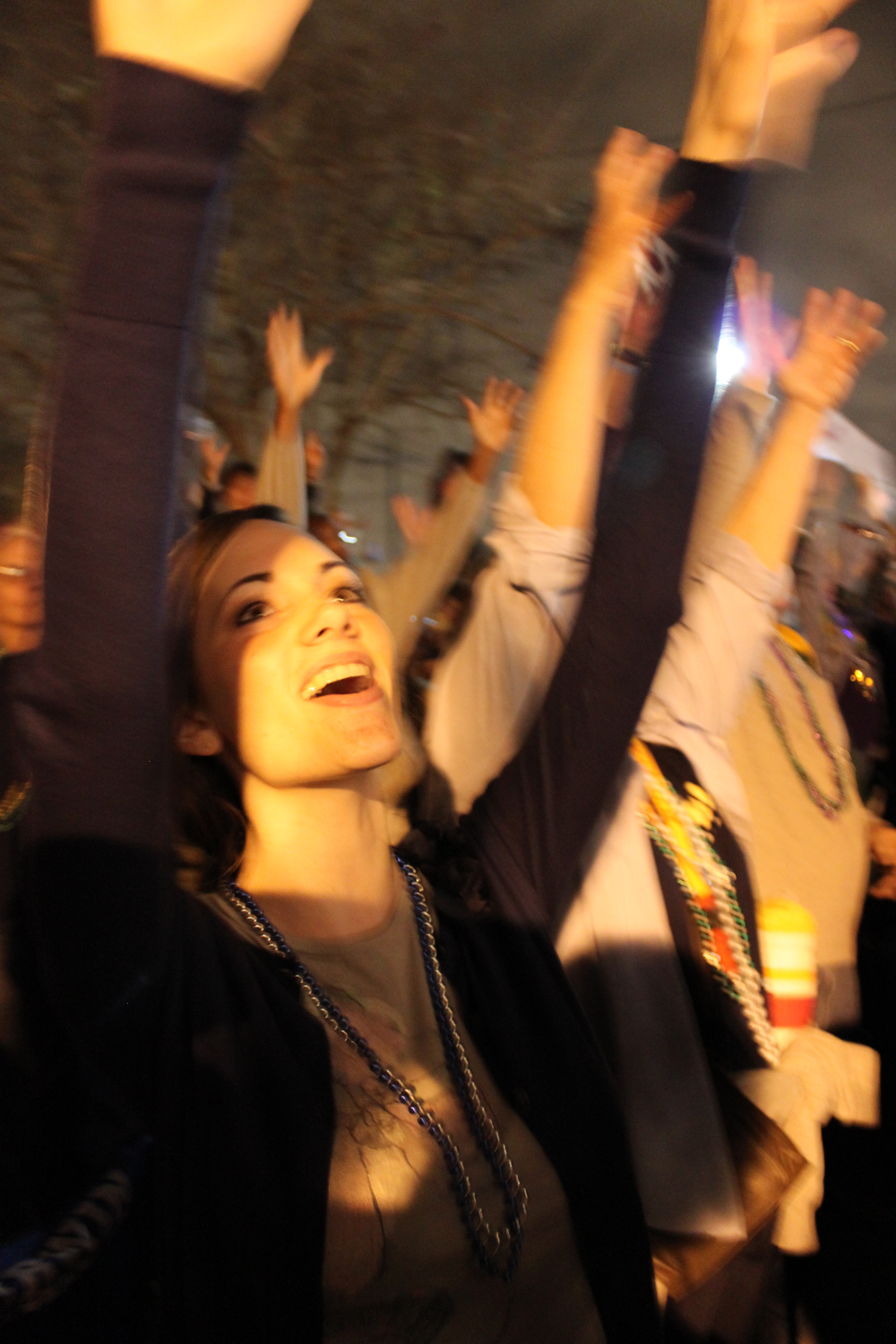 Contrary to popular belief, raising your hands, shouting, and catching is all that is required to get beads. Not flashing. (that is called public indecency, even in New Orleans) Although you might have to fight with the people around you to get anything that is thrown out. 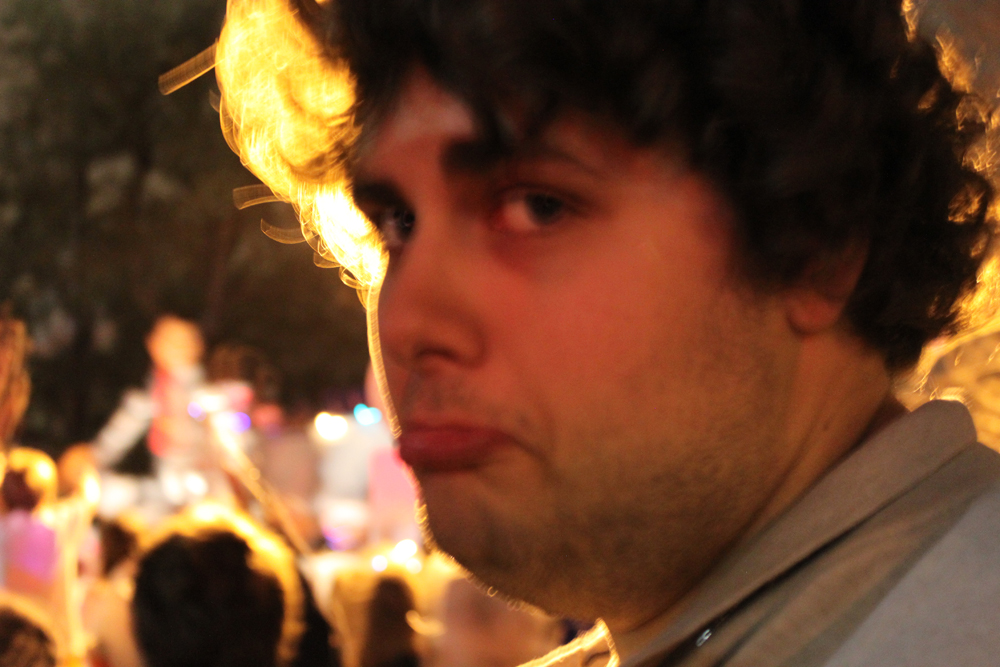 Drew acts sad when he doesn’t catch anything. 🙂 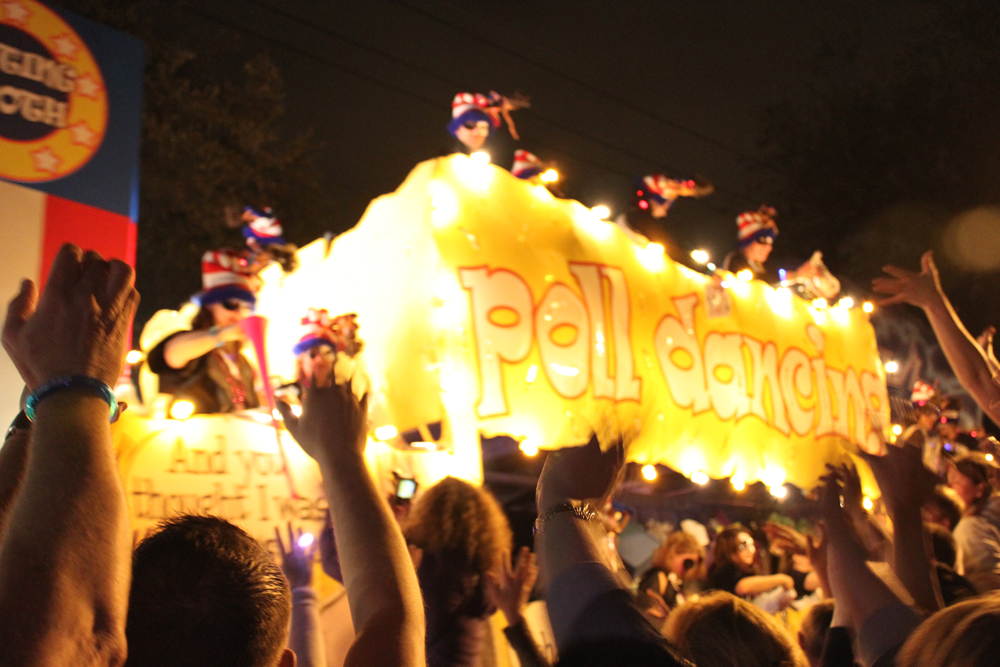 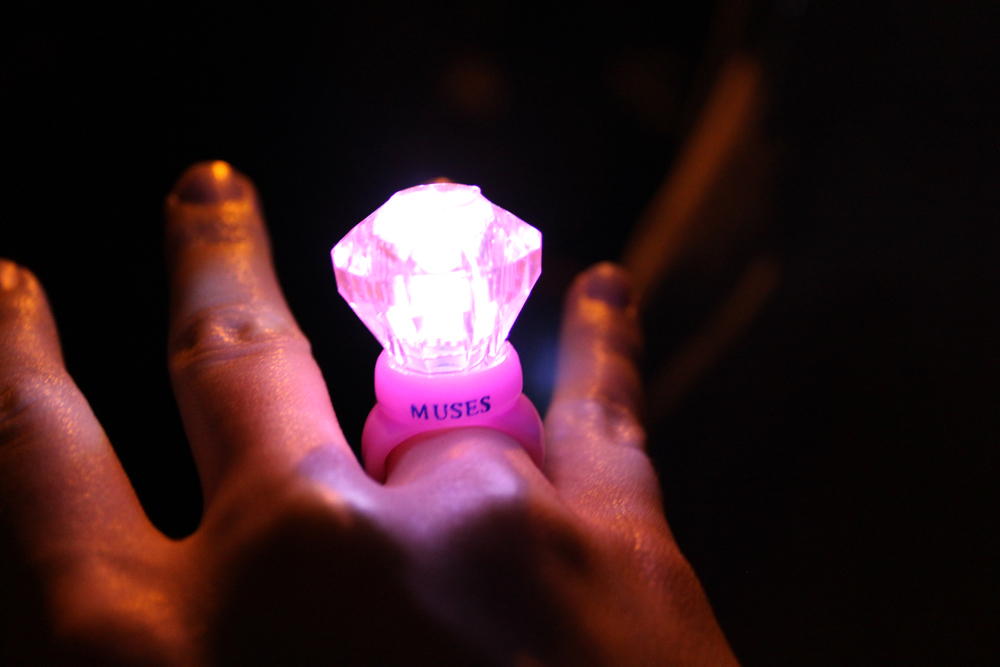 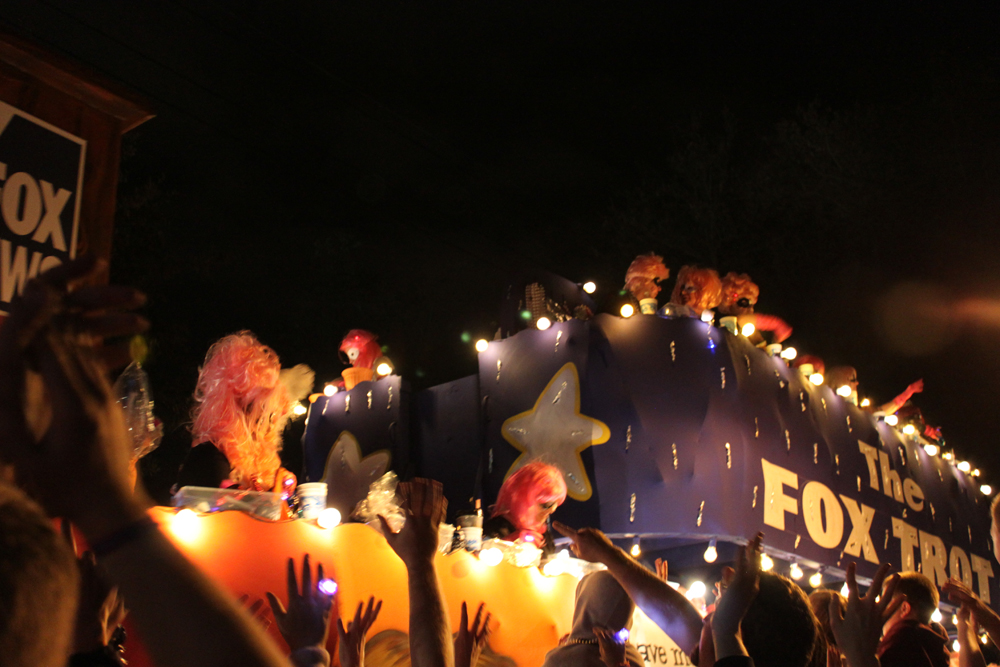 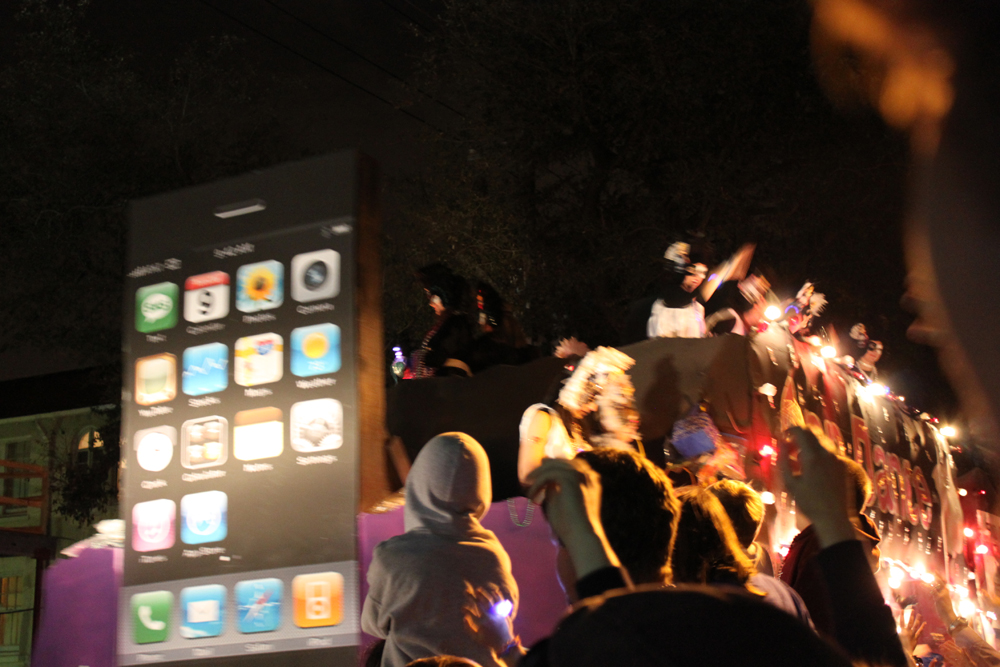 They all usually have clever names, mostly with political motifs. Some of the ones above were “poll dancing,” “fox trot,” and the one right above was “app dance.” 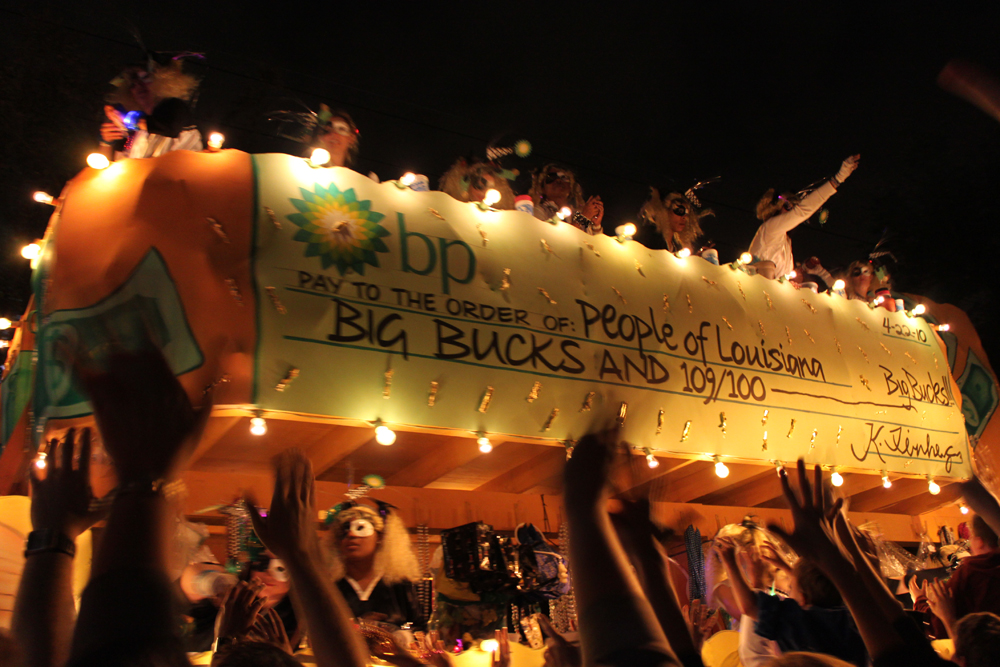 Of course, almost every parade had at least one float about the oil spill. 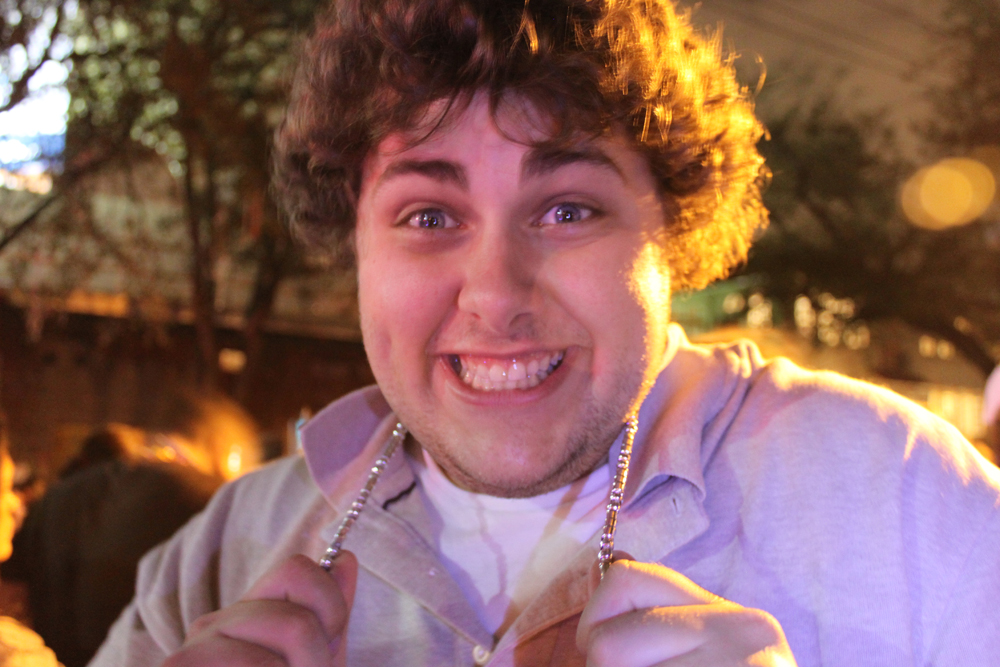 He finally caught something. 🙂 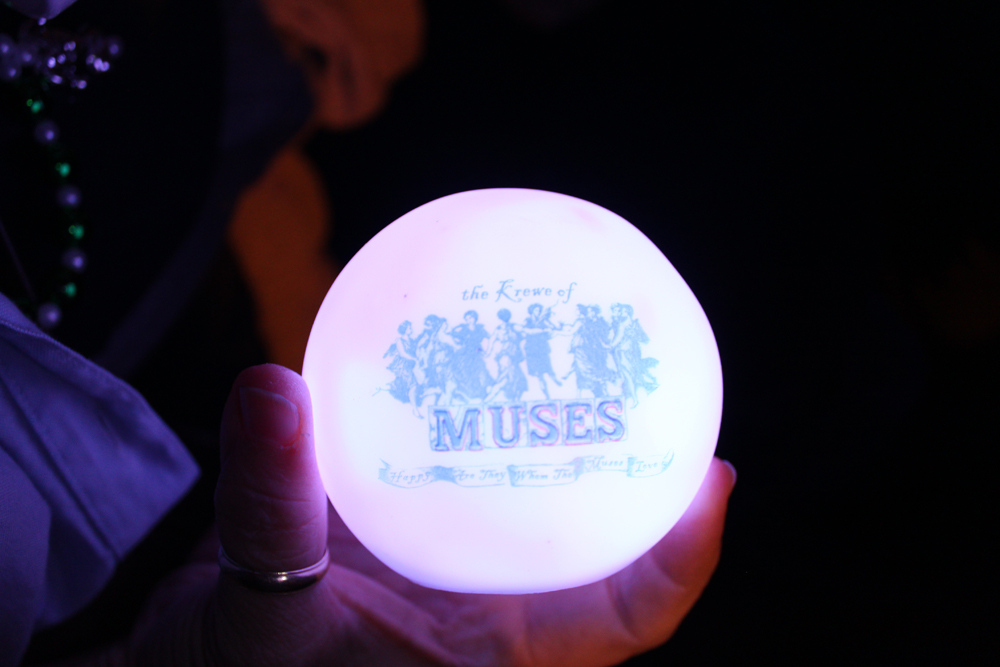 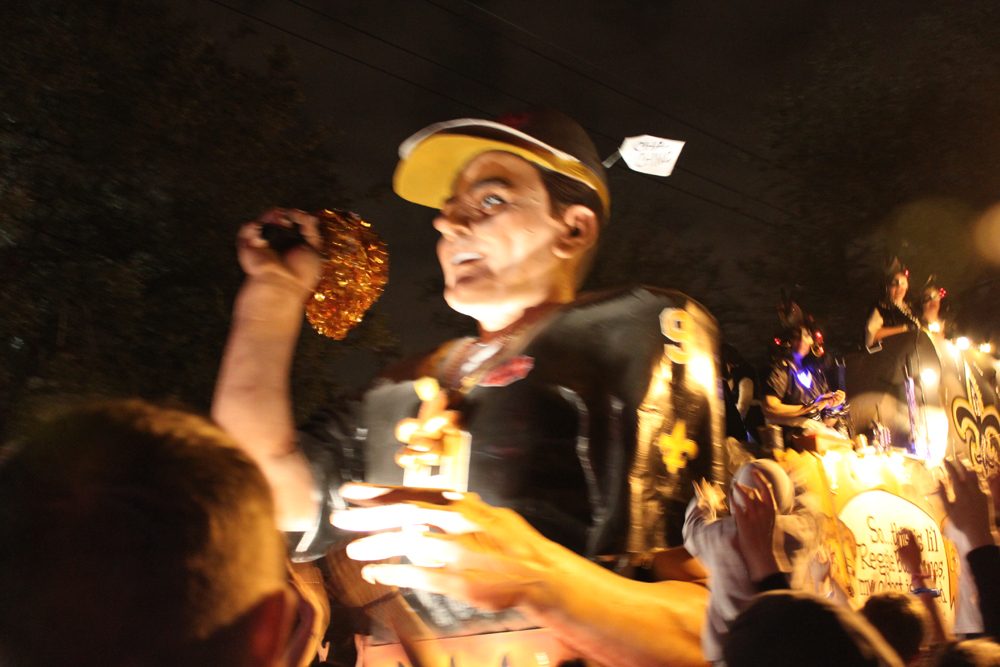 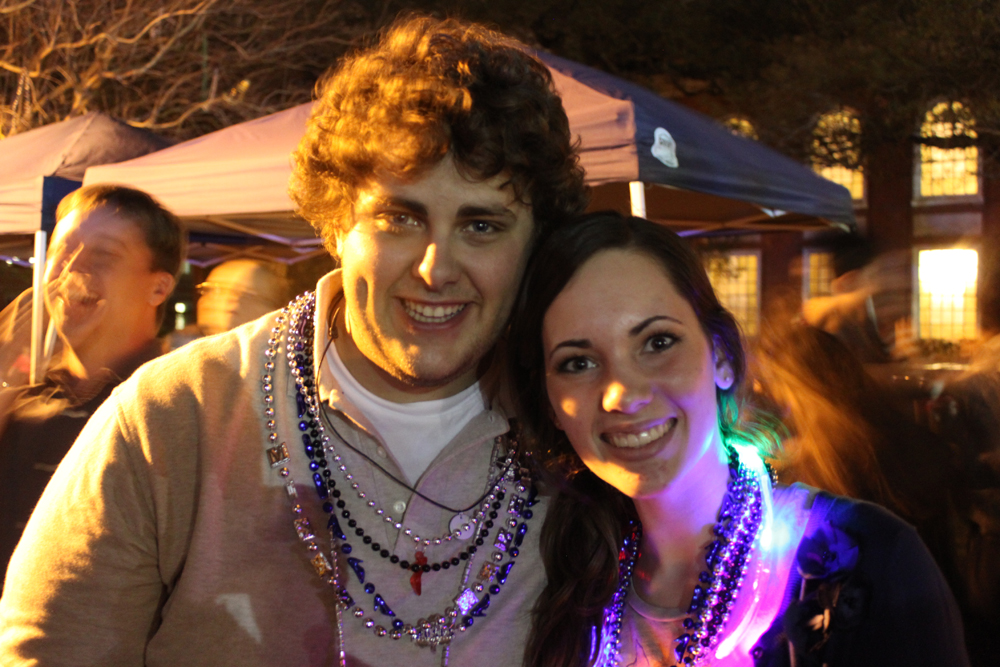 We caught a few more beads as the night went on. 🙂 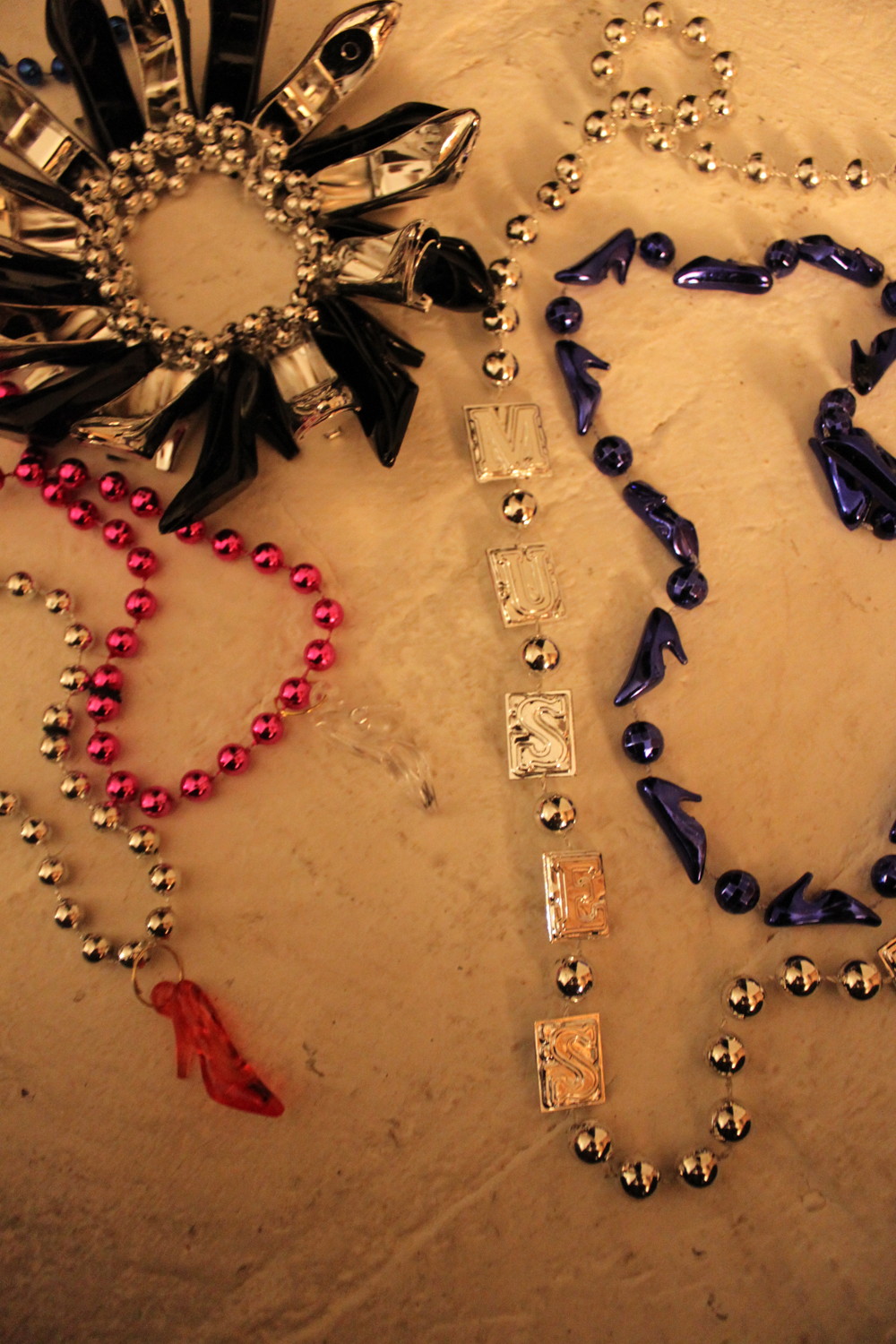 Here is a close-up of some of the high-heeled memorabilia we caught. 🙂

We didn’t catch any of the real high heels. We saw a few, but they didn’t throw them close to us. I wanted to get a picture of us catching something, but everything was moving so fast and the camera wasn’t taking the pictures fast enough, but anyway, it was a fun evening. All the traditions around Mardi Gras are pretty neat. It is nice to take time out of your day and just remember to enjoy life. That is one of my favorite things about New Orleans. People here celebrate everything. It is easy to get so caught up in the seriousness of life, it is good to take time out to enjoy it.

That reminds me of a quote I saw this week:

“Never get so busy making a living that you forget to make a life.”
-Anonymous

So take a little break this weekend and enjoy Mardi Gras wherever you are. Bake a king cake, buy some beads, have some friends over, and enjoy life. 🙂