We made good use of our condo’s kitchen all week long eating-in, but we did go out one night. We stayed in Perdido Key, Florida but we drove over to Gulf Shores, Alabama to visit Lucy Buffett’s restaurant. (that is Jimmy Buffett’s sister for all you Jimmy Buffett fans out there) 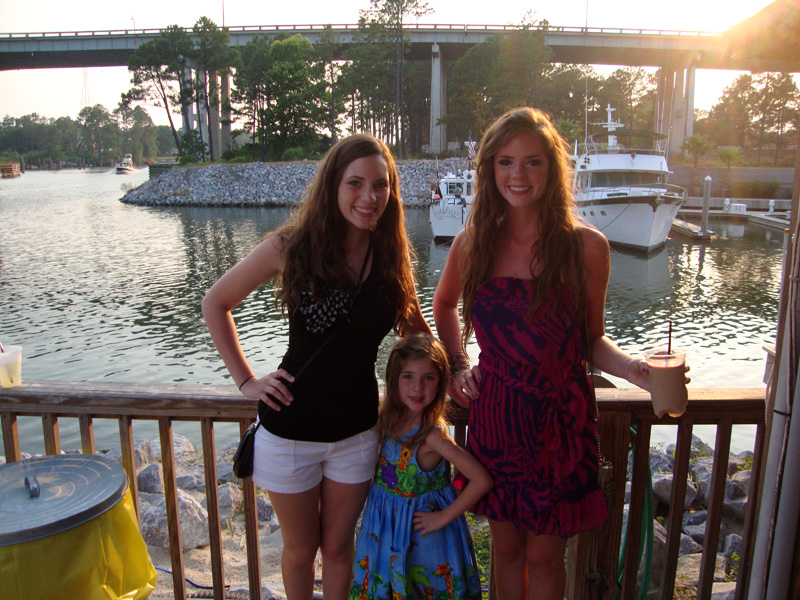 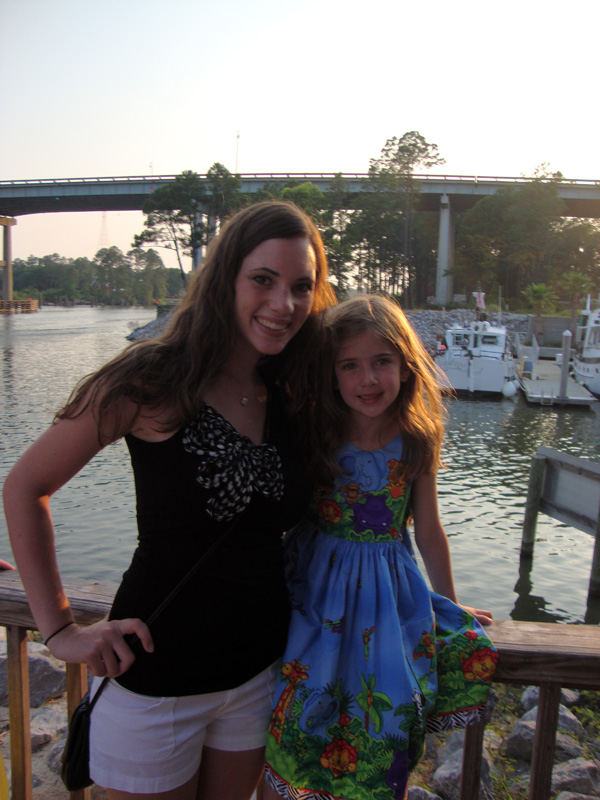 It is quite the establishment. It is on a marina and hosts lots of activities. They have little gift shops, sand patches for kids to play on, several bands, tiki drink huts, the main restaurant and several other patio areas to eat at, and they have this huge jungle-gym-rope-climbing thing. 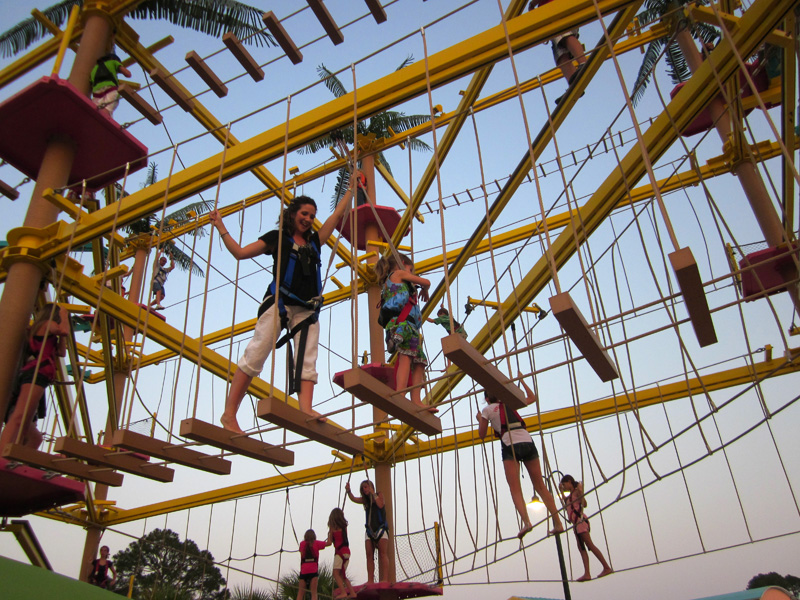 The jungle-gym-rope-climbing thing was covered with little kids, so I just assumed it was for little kids without paying much attention to what it actually was. Evie decided that she wanted to go (we had a long wait for a table) and since she was a couple inches too short, she had to be accompanied, so Blair decided to go with her. Jill and I decided, what-the-heck, we might as well join them too. 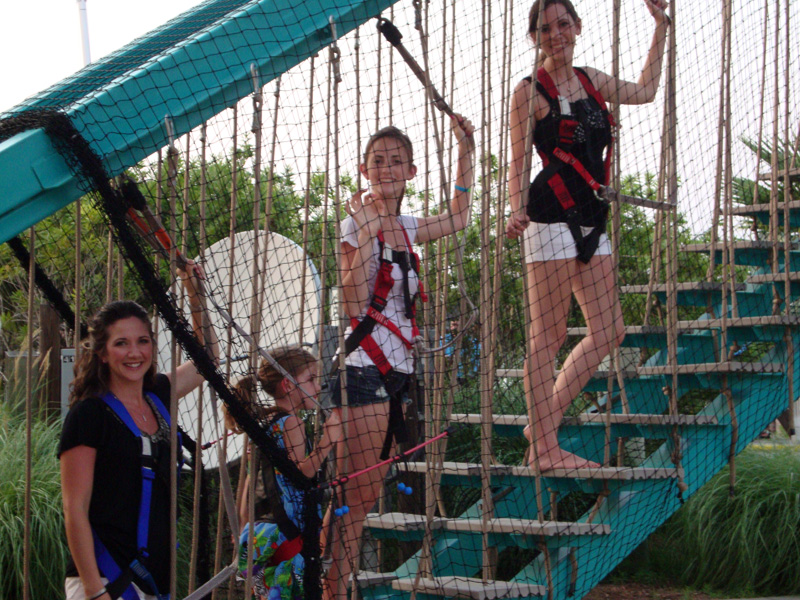 Little did I realize that it was a little scarier than I initially thought. 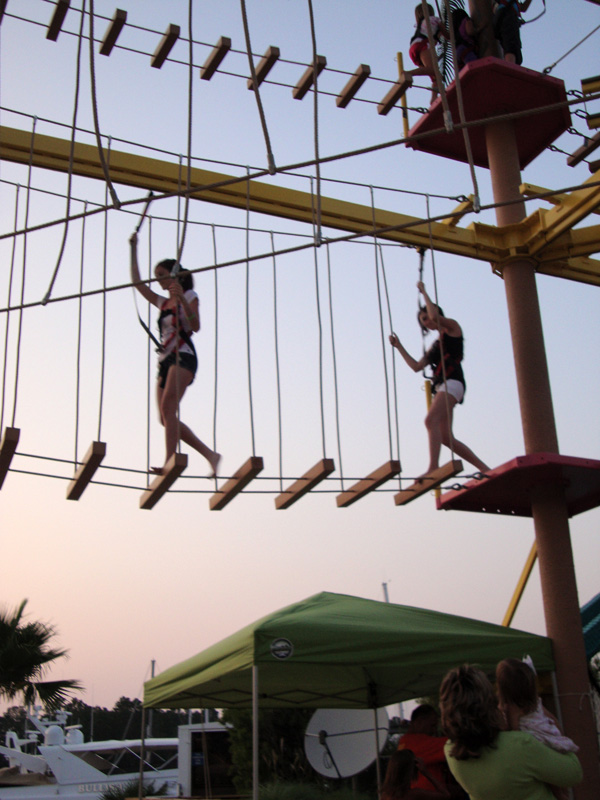 You were hanging from a rope thing, so it wasn’t like you were going to fall to the ground if you fell off the ropes, but I also didn’t want to fall off of them and just be hanging there from my harness waiting to be rescued. 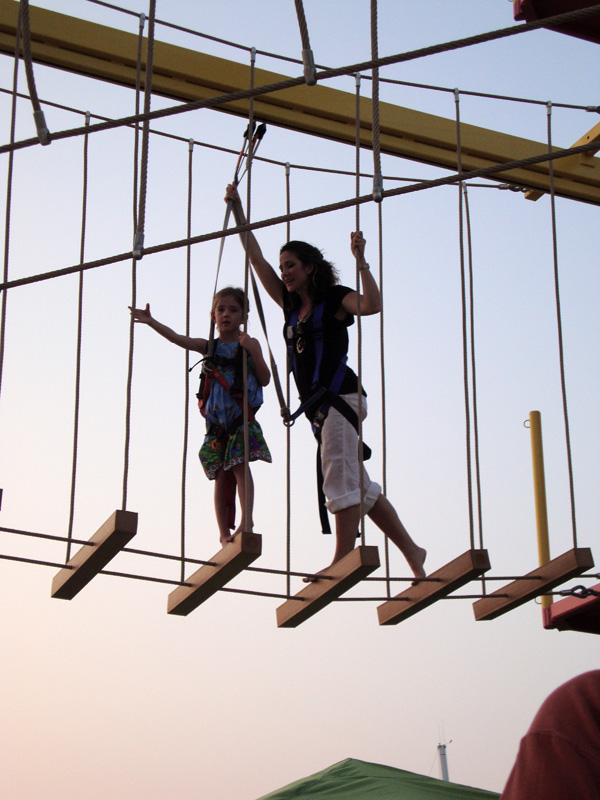 Some of the obstacles were just a little rope you had to walk across while it was swinging back and forth. 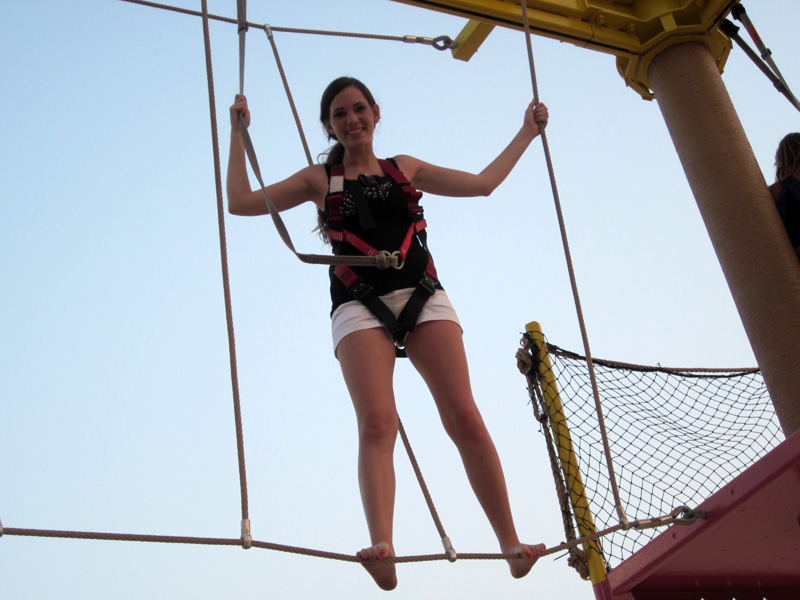 They also really hurt your feet. I think it would have been better with tennis shoes instead of being barefoot. 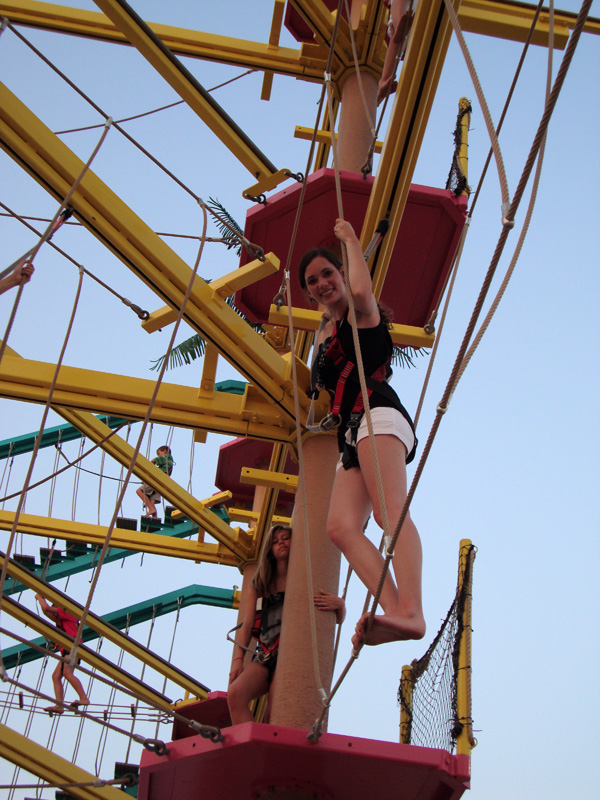 I’m not really sure how all those little kids were jumping across everything so fast. They were fearless, I tell you. 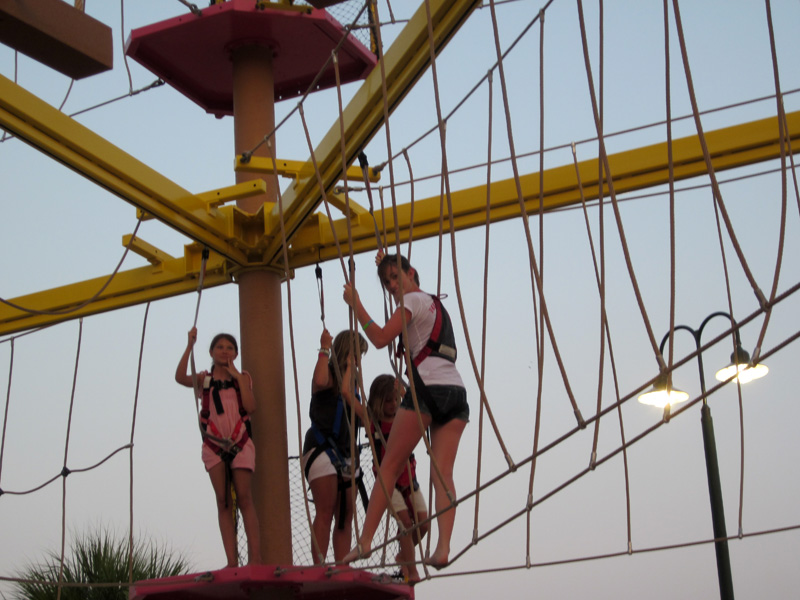 Evie realized pretty quickly just what she had gotten herself into. I think she was a little freaked out. 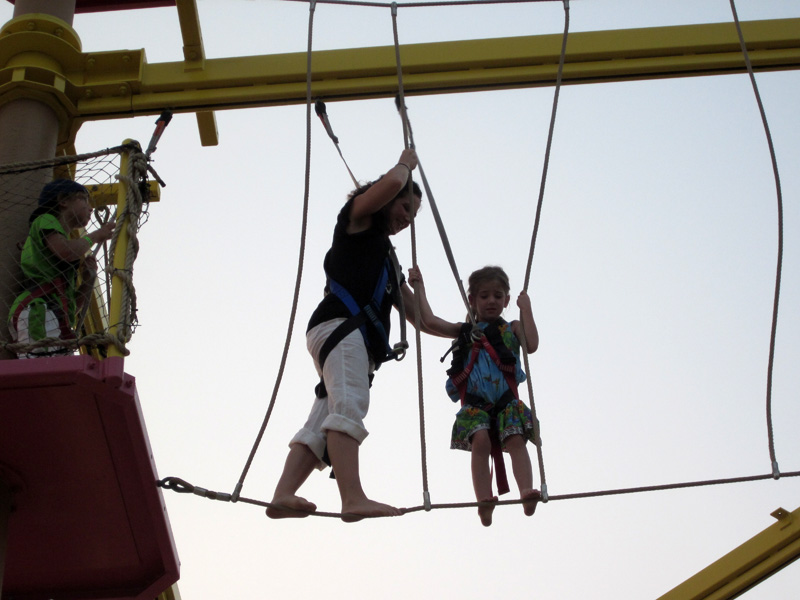 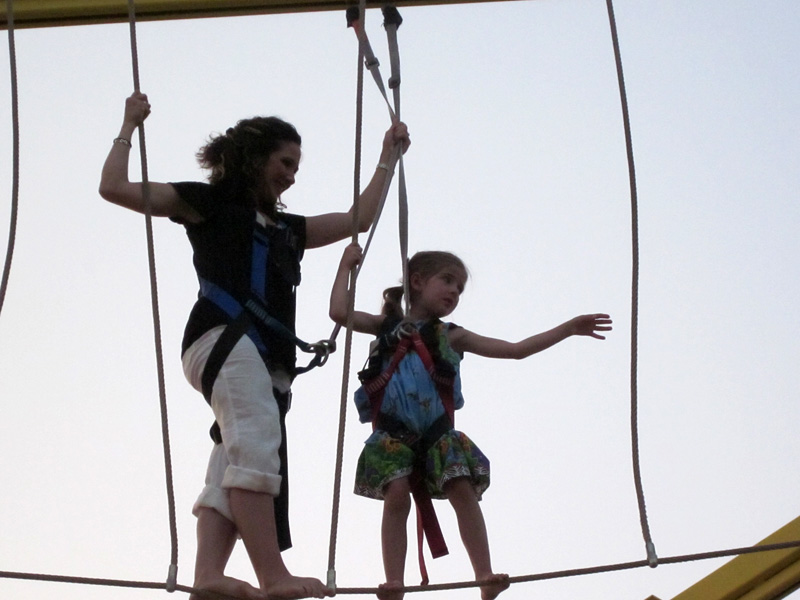 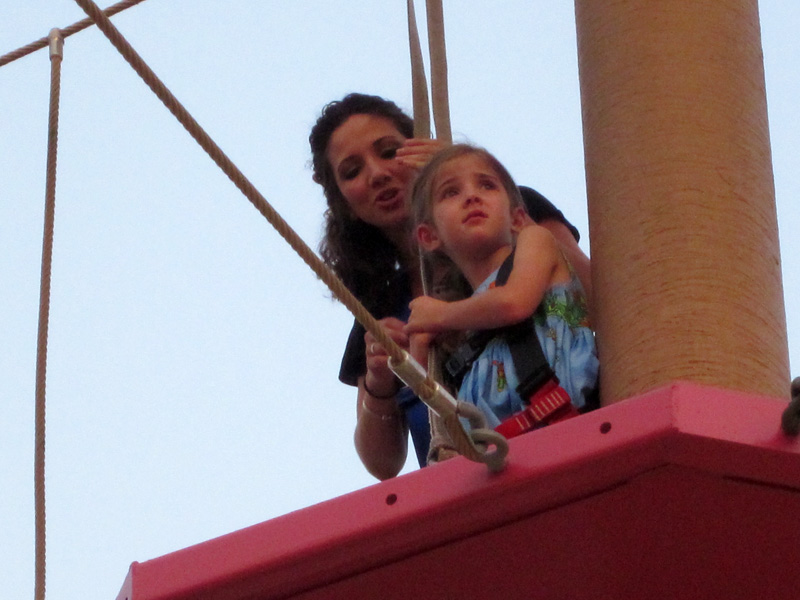 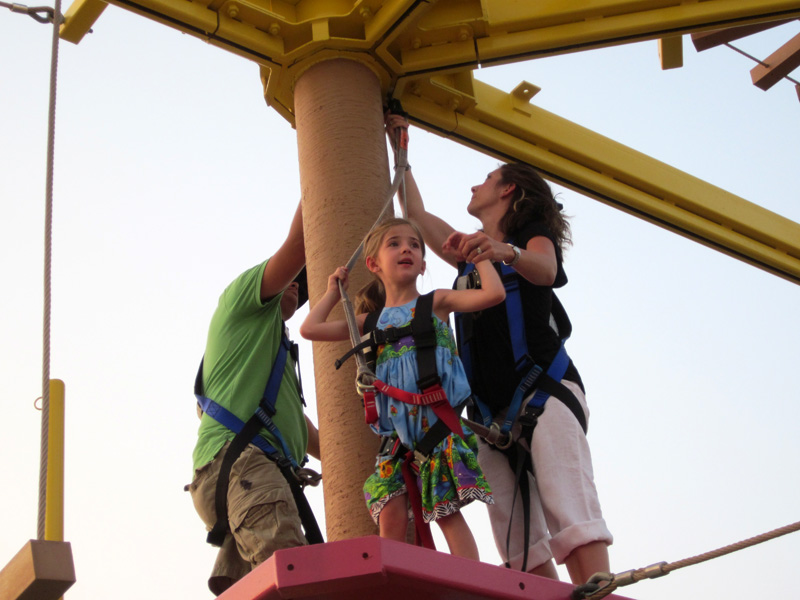 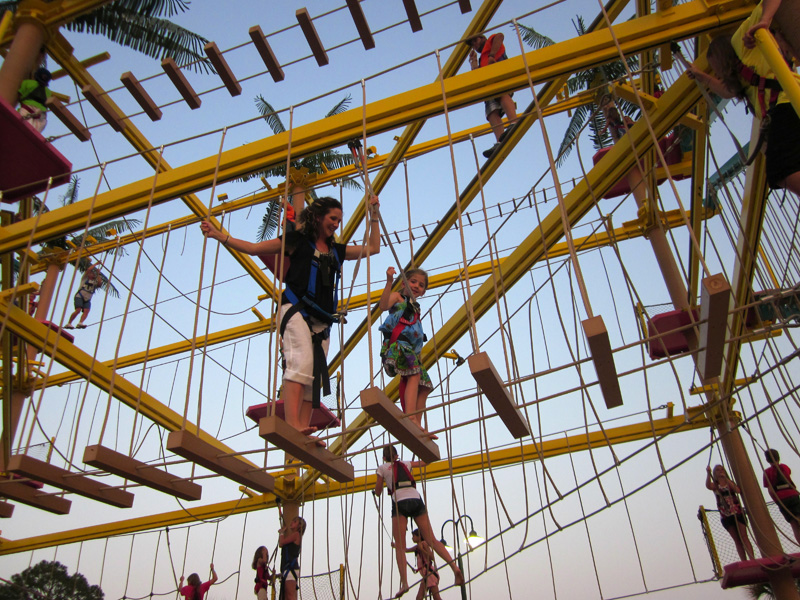 I think she did enjoy it a little too. She made it across several of the courses and then went back down to hang out with Mimi, Pops, Kelsey and G. 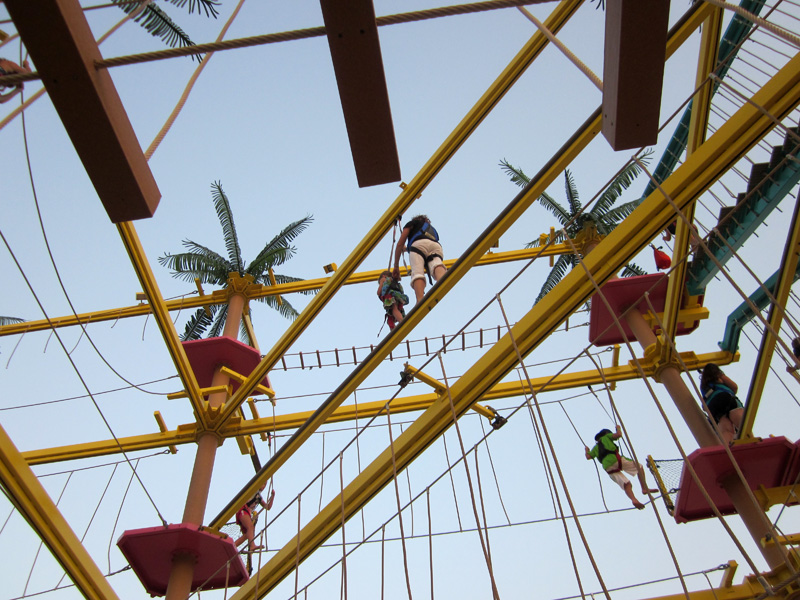 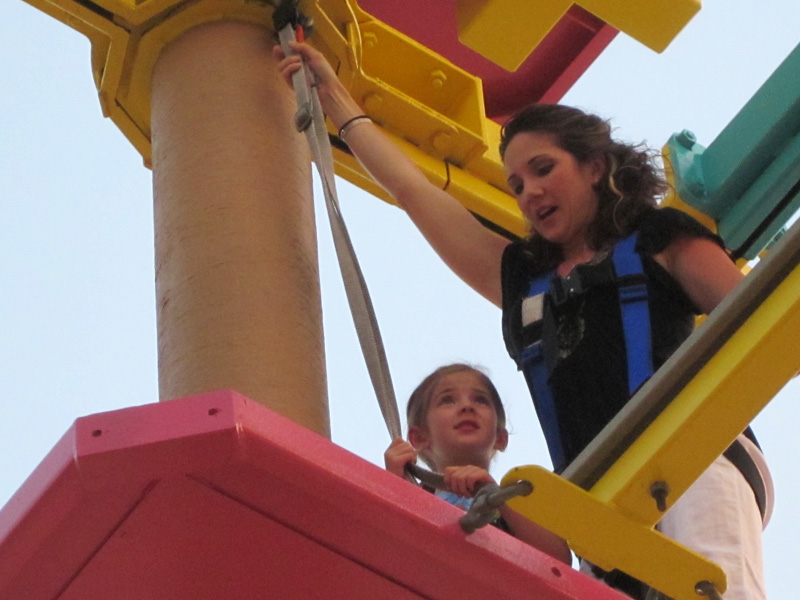 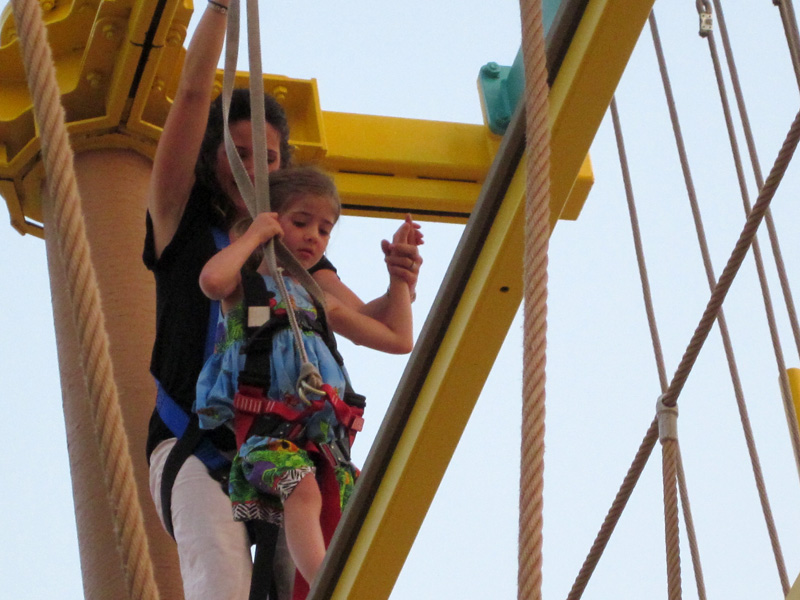 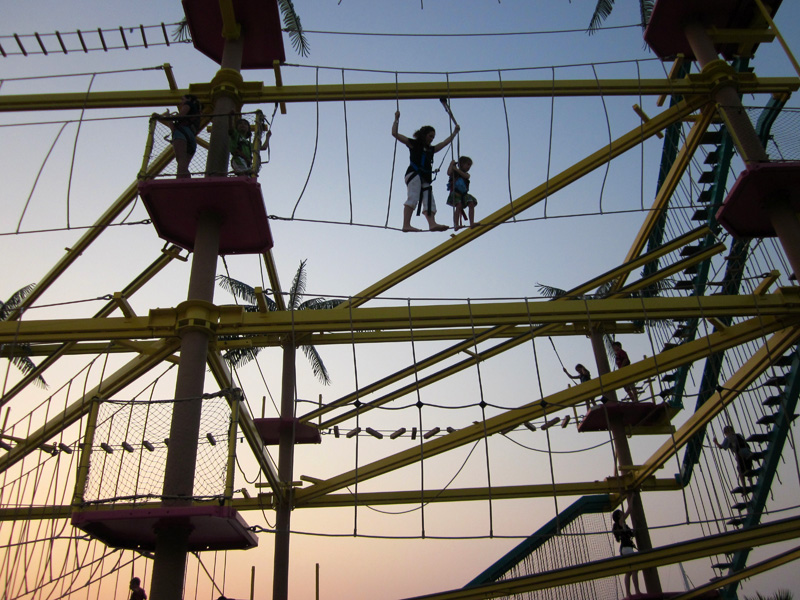 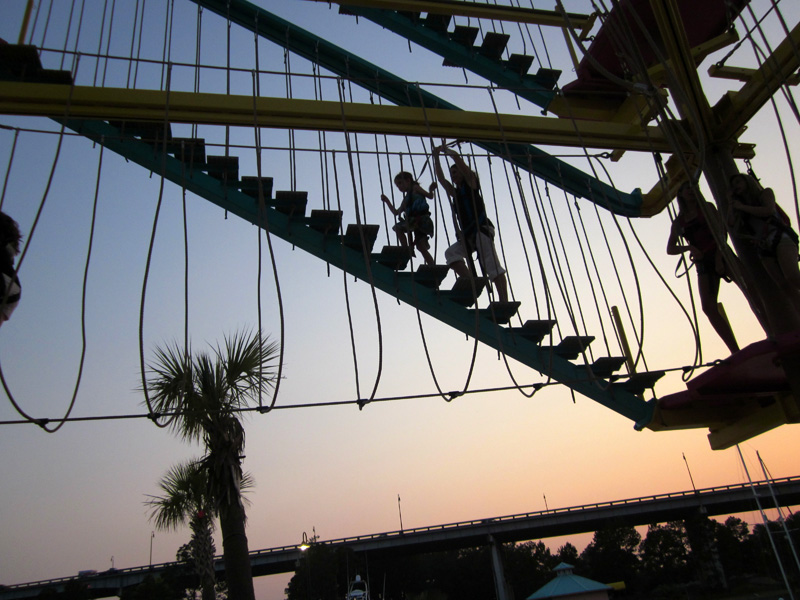 She did go up pretty high though before she came down. She was really brave! 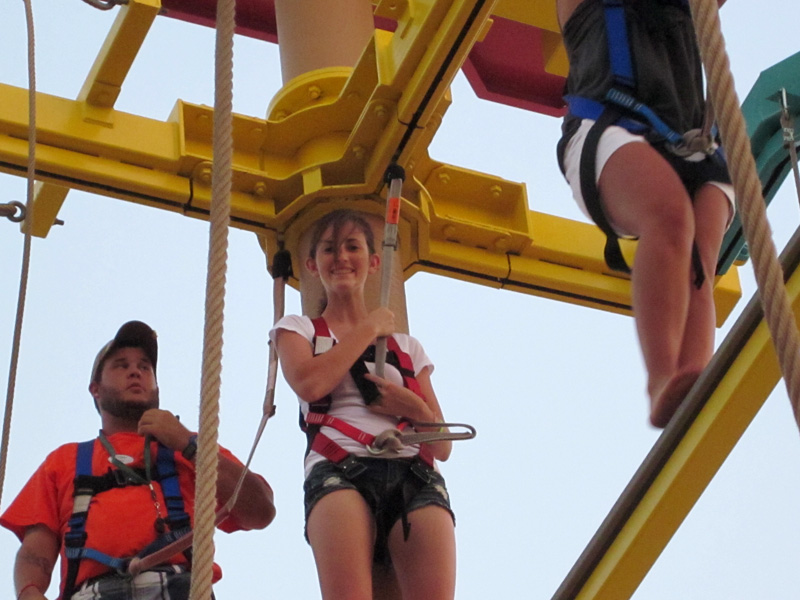 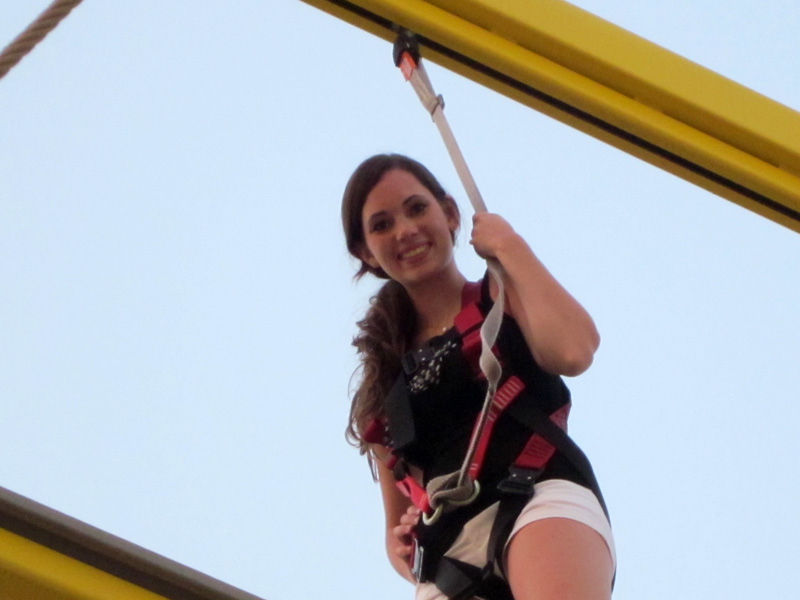 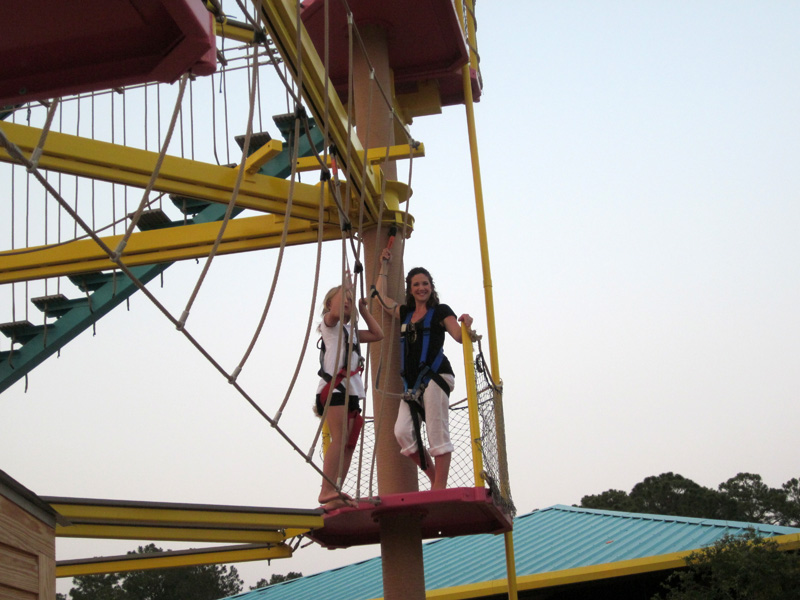 Blair came back up after dropping Evie off to finish the rest of the course. 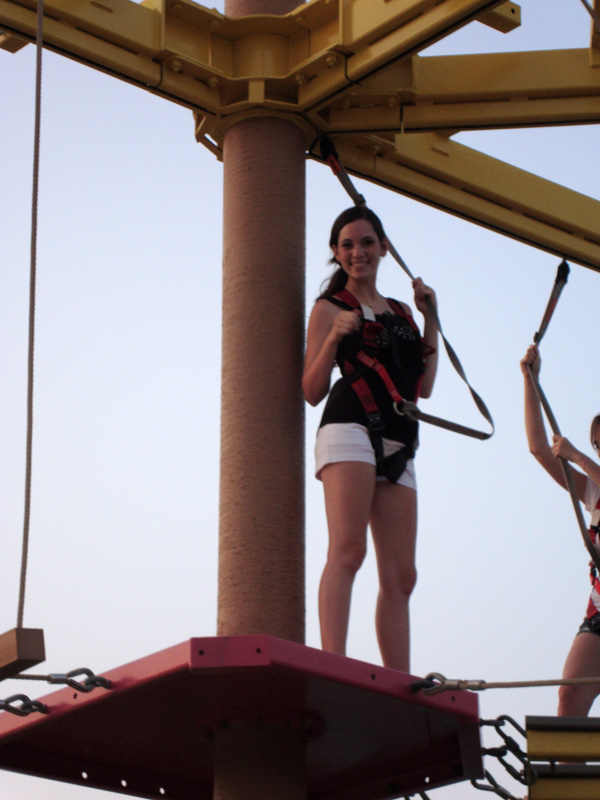 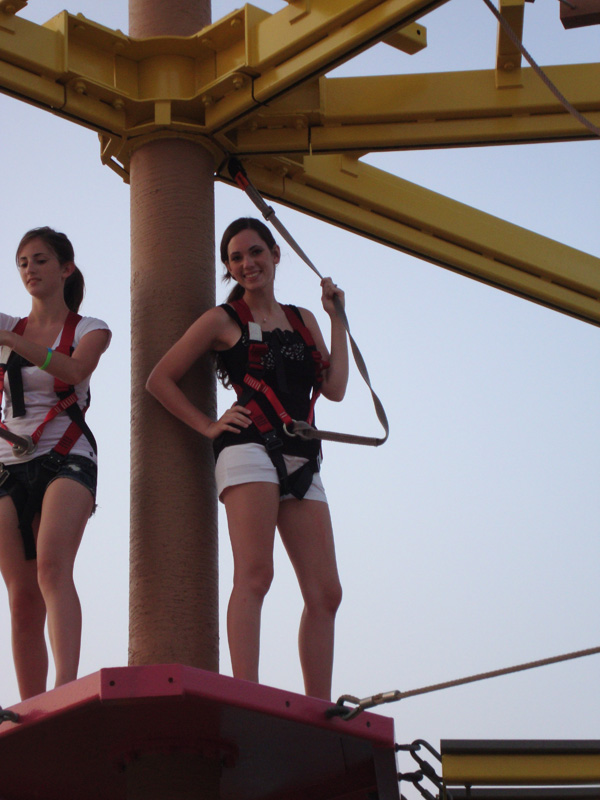 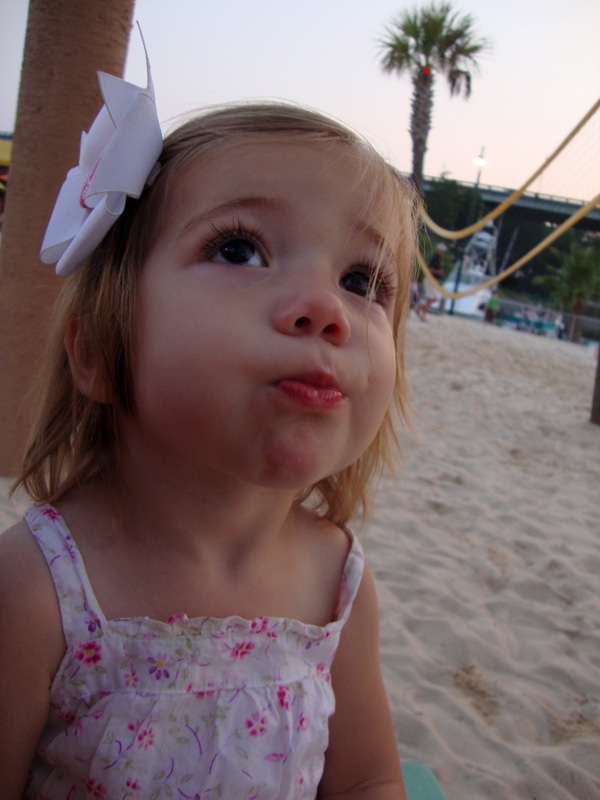 All the while, G sat with Kelsey and watched from below. I’m not sure what she was eating here. 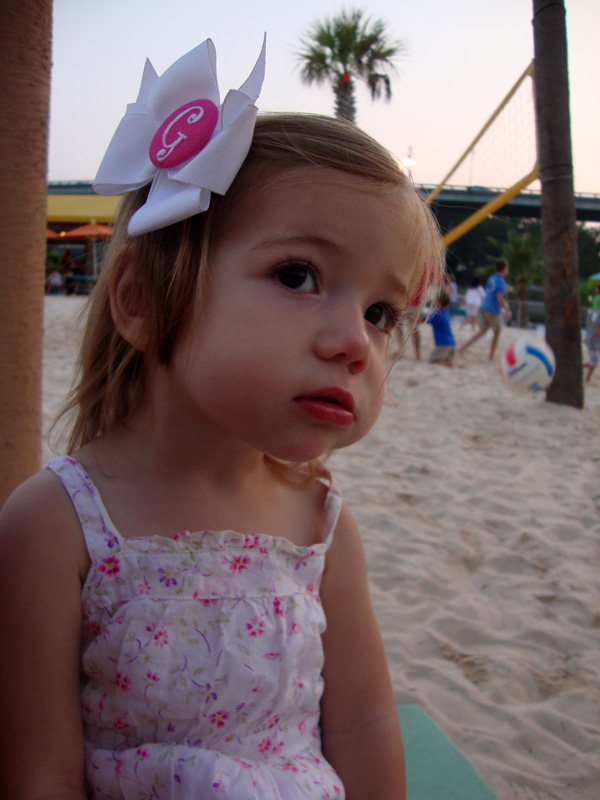 She is so cute! I bought the dress she is wearing for Evie when she was little. 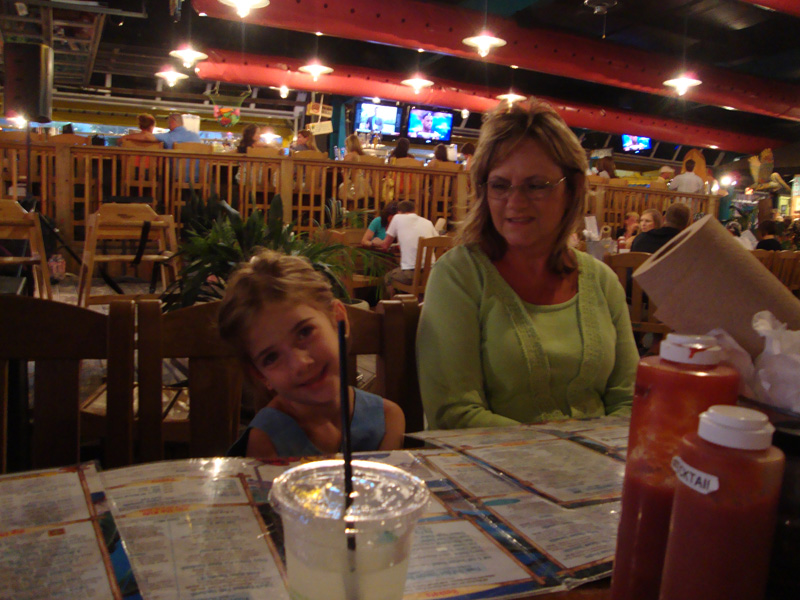 Then of course we got called to our table while we were all up in the air. 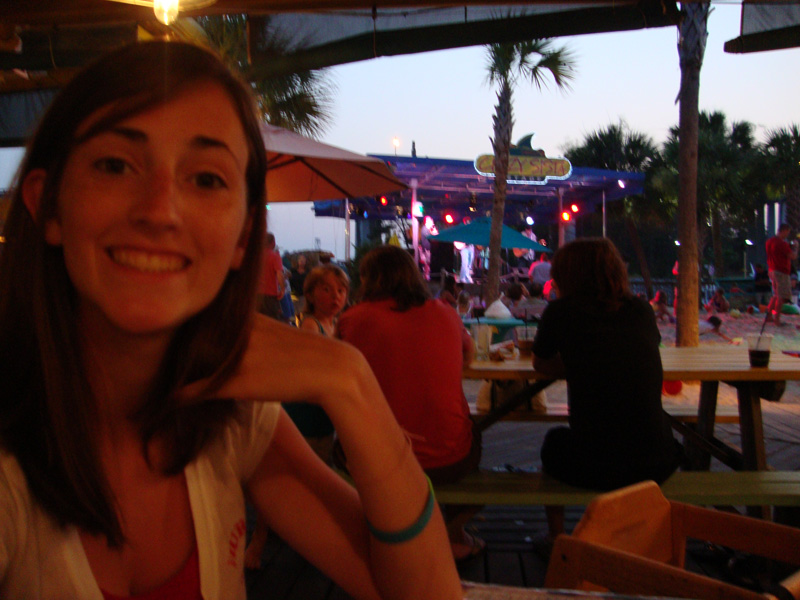 I would say, in my opinion, that the night was definitely fun–spent with family in a fun atmosphere–but I wasn’t overly impressed with the food. I had grilled fish, and it tasted super rubbery and bland. Blair’s fish tacos were good though and so was mom’s Cheeseburger in Paradise. 🙂 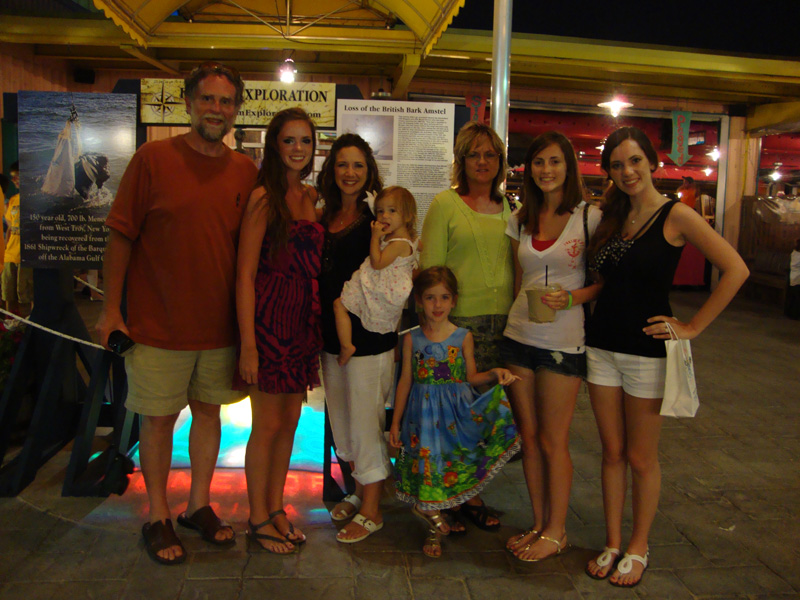 Plus we ended up with the only group picture of us from the whole week. Look at that bunch. 🙂