In honor of Valentine’s Day (and well, just because it is my favorite dessert), Drew and I decided to make a fruit tart this past weekend. My mom makes them and they are AMAZING! One of my absolute favorite things. Drew and I had bought a tart pan over Christmas break when we were shopping and we had yet to use it, since tart is probably not the best thing on our eating healthy diet. I really wanted one, and since I won’t be home for a while to have my mom make me one, we decided to try it. It isn’t that difficult of a recipe, but it does involve cutting in butter and we didn’t have a pastry cutter. You should have seen us in the kitchen stabbing at the butter with knives trying to cut it up. It didn’t work very well for us. I eventually ended up using the end of a wire whisk to cut up the butter into smaller chunks. It is also sort-of a big ordeal to bake anything in Drew’s kitchen, because there is only one (tiny) section of counter top. It makes it especially hard to roll out dough. The tiny kitchen was covered in flour!

Our tart wasn’t a complete disaster, it turned out relatively well, the main problem was that our tart pan is a lot bigger than my mom’s tart pan. So in order to get the crust to fit in there, I had to roll it out thinner than it was supposed to be. (that and the fact that Drew kept eating the dough–but the dough of tart crust, is the absolute yummiest of doughs) Anyway, we got it in the pan and it was supposed to bake for a while with the pie weights in it to keep the crust from bubbling up. So I did that. Then you are supposed to take the weights out and cook it for just a little bit longer. So I did that. I only put it in there for two more minutes and when I came back to check on it, DISASTER had almost ensued.

It wasn’t burnt, thank goodness, it was only merely (a lot) overdone. The bottom of it, where it was rolled too thin, was a little too brown and hard. I couldn’t believe how much that thing cooked in those mere two minutes! I guess it really was too thin. But anyway, we let it cool and then I put the filling on it and the berries and it still tasted wonderful. The crust was a little too crunchy, but it did keep it from getting soggy the next day. 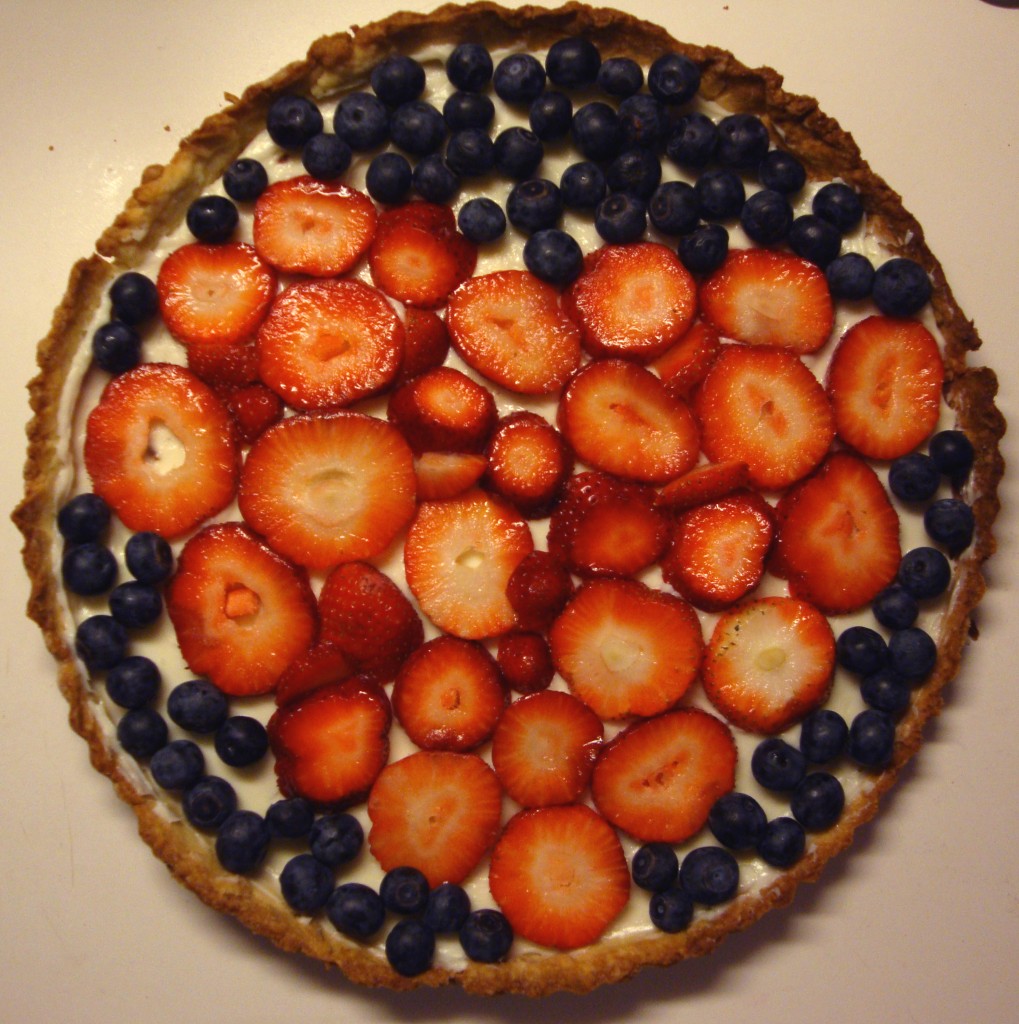 After we finished it and each ate a piece, came the next ordeal: trying to fit it in the refrigerator. We only have a small, baby, apartment sized refrigerator. We always have it full. Plus we had just gone to the grocery store and we have a gigantic pot of beef stew leftovers in there. The main problem was more about what to put it on to put it in the fridge. Our plates aren’t flat, plus they were too small. Luckily though, Drew’s microwave stopped working a couple months ago, so he had to get rid of it. He did however keep the glass piece out of the bottom of it–like a big glass plate. It was flat, although still a little too small for our tart, since he had a small microwave, but I cut the tart all up and made it fit on the microwave thing. We wrapped it in foil and I rearranged the whole fridge and got it to fit (barely).

I guess we didn’t have to worry about that for long though. It was so tasty that we have already eaten almost the entire thing. Just the two of us. Eek! We’ve got to get better about this diet! Although it did get Drew to actually eat a few blueberries. (he doesn’t like blueberries) I told him he needed the antioxidants and he couldn’t have any tart if he didn’t eat the blueberries on it. He agreed, but got the pieces that were all strawberries with just one or two blueberries. Oh well, I guess it is better than none.

Anyway, Happy Valentine’s Day to you all! I’m off to go eat another piece of tart! YUM!