Drew and I have been working on our budget. We are pretty thrifty people anyway, but Drew has a weakness for going out to eat. I cook almost all the meals we eat around here, but Drew doesn’t like doing the dishes, so very often he offers to just go out to eat rather than dirtying up more dishes. There are just two of us, so going out shouldn’t be too bad, but in New Orleans there isn’t anywhere that we can eat for under $20 (total). It usually is more like $30. I can buy all the fresh meat and veggies we need to make over a week worth of meals for $30! I like to cook anyway, so we are cracking down and putting a stop to the eating out. (not that we do it all the time or anything, but once is more than we have the money to spend it on.) We’ve got to be saving for our wedding/honeymoon.

Tonight I made Chinese! (I LOVE Chinese food!) I even cooked in a wok and made fried rice and homemade Chinese white sauce for our meat and veggies! It turned out really good! (I thought about making egg drop soup as well, but I already had too much going on to handle another dish!) 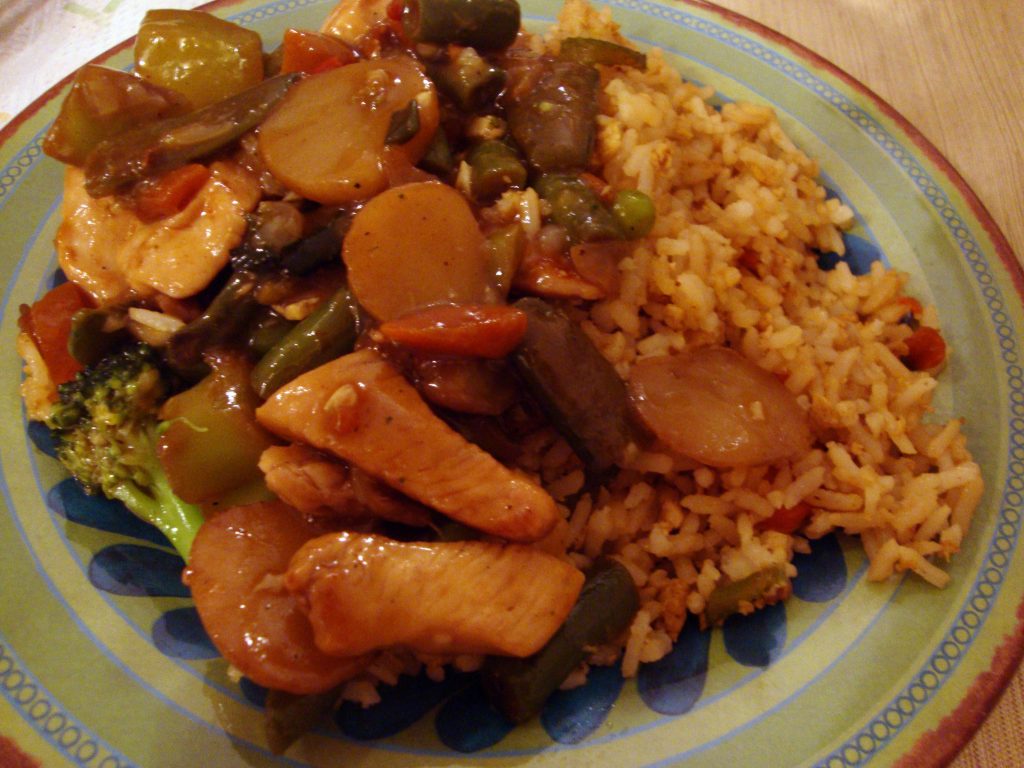 Speaking of budgeting, we’ve been working on the wedding budget this weekend. I had talked to possible photographers already, but I also looked into prices for flowers, venues, and catering this weekend. Plus I tried on dresses last week (and looked at the price tags!). Weddings are soooo expensive! How on Earth can people afford these! Did you know that the majority of Americans spend between $18,000 and $30,000 on a wedding! That doesn’t include the cost of a honeymoon or engagement ring either!

I’m trying to do as many things myself, but still, there are just a lot of things you have to pay for! Our draft guest list is at almost 250 people and that is mostly all family and several of our parents’ close friends. There aren’t very many excess people that we could cut off to cut costs. If each person cost $8 a meal, that is already $2,000, just in food! (and I can see people charging more than $8 a person! One of the caterers I looked at was $16 a head!) The photographer I want with digital copies of our pictures is $1,500. Flowers for bouquets, boutonnieres, and 20-30 tables at the reception is going to be around $500 (and that price is low for that many table arrangements). The dress that I really liked at the bridal shop was $1329. (that price was pretty average too) I’m definitely going to try to find something much cheaper than that though, no matter how much I liked it.

I’m worried about how much the venue for the reception will cost. I want to have the ceremony outside at my house, so other than plants and clean-up that is free. The reception I wanted to have in a pretty old wooden barn, but we don’t have one of those. (my grandparents have a barn, but it isn’t big enough and is falling apart) I don’t know where I can find one close to home either. Plus most wouldn’t even have a floor, not to mention electricity or bathrooms. A big white tent for the backyard is upwards of $3,000. Where would people use the bathroom at? What if it rains? Is the ground going to be muddy in the springtime? Up go the costs of renting tables and chairs as well. 🙁

Still I’ve got the costs of wedding rings, tuxes, bridesmaids dresses, shoes, veil, jewelry, hair appointments, decorations, cake/dessert, tablecloths, glass bottles for the table arrangements, invitations, save-the-dates, postage for invitations and save-the-dates, bridal shower, marriage license, and the list goes on and on and on! Hope no one wants to drink at our wedding. We can’t afford to pay for drinks. We can’t even afford to pay to feed anyone!

I haven’t said anything yet about a honeymoon either! I hadn’t even thought about the costs for that because I’ve never had to pay for a trip before. If we go somewhere for 5 days and pay an average hotel fee of $200 a night, that is already $1,000. Add in at least $800 in airfare. How are we going to get around? A rental car? That is around $30 a day! Plus gas! What about food? What about sightseeing? At minimum the honeymoon would be $2,000. That is leaving $200 for car, food, gas, sightseeing, etc.. which isn’t very practical. I know it will cost more than that.

I’ll be working this summer, but even if I worked all day long, every day of the summer, at minimum wage I couldn’t even save up enough for the honeymoon alone! The estimated cost of the wedding is at almost $10,000! I can’t even imagine telling my parents that! My dad has no clue how much a wedding is going to cost. That price isn’t even for anything extravagant! That is no alcohol, catering for one entree and two sides, water and lemonade, venue, flowers, photography, clothing, and decorations. That doesn’t include the honeymoon. Maybe I’ll be able to afford this wedding when I’m 40! I know realistically that I could get married in my living room by my dad for free. (others have done it) But I have had this picture in my head of what I wanted for my wedding since I was 8 years old! I don’t know what to cut out and still make it work with my vision. I’m only getting married once, I want it to be nice! Why is everything so stinking expensive!? 🙁