Well, yesterday didn’t exactly go as planned. Drew and I had been doing homework most of the weekend, so we decided to make a quick trip to the mall to walk around and get out of the house for a bit. We didn’t really need anything, but decided to see if we could find a nice computer bag for Drew. (the one he has right now does not exactly scream professional) So we went to the mall, where everybody and their great uncle’s second cousins twice removed also were. It was super busy, so we just looked around a little and then decided to leave and pick up some wings and head back home so that he could watch the Superbowl. They have been doing road construction for a while all around the mall and as soon as you pull out of the parking lot, you are ushered into crazy traffic to get onto the overpass and cars are flying past all over the place and it is just a huge mess. Well, we are just about to merge into the fast-flowing traffic on the causeway and the car, a taxi, in front of us starts to go, Drew looks behind to make sure he is clear to get over, starts to go forward and crash, bang, boom, ends up not entering the causeway, but going straight into the back of the Yellow Cab (which happened to be painted orange) in front of us. On Drew’s behalf, the car in front of us, despite being a taxi, did not know how to drive, and instead of going ahead and merging into the traffic like he had started to (and all was clear for him) he started forward and then suddenly chickened out and stopped right in front of us. I saw this, and started yelling at Drew to stop, but by then of course, we were already all up in their orange paint.

Of course this automatically makes for a not-so-great day. We only went forward a couple feet and really only scratched the other car, but Drew’s car has a pretty substantial dent all in the front, a bent hood, broken light, torn off license plate, cracked bumper and the radiator leaked all the water out of it. So now we were stuck on the front of the entrance to the extremely busy highway and whenever Drew tried to start the car back up, it kept revving up all the way, making loud noises, and the gas petal was sticking. Not exactly the safest thing to drive anywhere, especially when the cars next to you are all going 60+ mph. So we waited and waited and waited some more for the police to come and then it took forever for them to handle the whole mess. Trust me, you don’t realize really how alone you are in such a big city until you are literally on the side of the road with no vehicle (that you can drive, that is) and no one that you can call to come and get you. So by then, it was dark and we walked over to a gas station that happened to have another taxi there that we paid to take us home. Although once we got home and were able to look up towing companies and repair places, and called them, they told us that we had to be there for them to tow the car. So then we had to get back there for that all to happen and needless to say, it has just been a big mess. Luckily we weren’t hurt at all and only the front of the car is messed-up. There were glitches in the insurance that had us freaked out for a bit, but now it seems to have all been taken care of, although it has been a stressful twenty-four hours. He got a rental car this afternoon, his car is in the repair shop, and everything should be on the right track to getting it repaired.

On a lighter note, today has been much better. I made smothered pork chops with rice and green beans for dinner. I don’t cook very much pork usually, so I decided to try out a combination of a couple recipes I found for smothered pork chops (in a onion and mushroom gravy). They turned out pretty well, although I accidentally added a little (or a lot) too much pepper (it just came out of the top of the shaker too fast). But after the pork chops and the gravy simmered for a while, it somewhat diluted the pepper taste. I would definitely make these again sometime, sans the extra pepper. Dinner added a much needed smile to someone’s face: 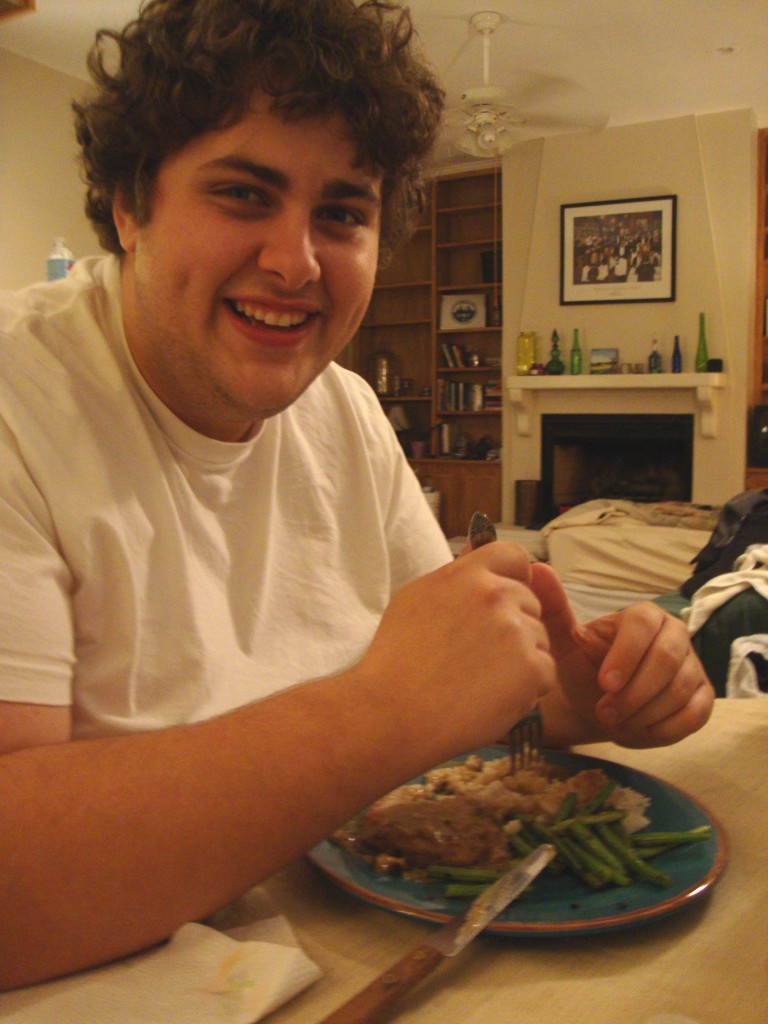