Another one of the great things about our new apartment is that it has plenty of storage space for us. There is a large pantry in the kitchen in addition to cabinet space, an extra stairway entrance that we can use completely for extra storage, a nice sized laundry room with shelves and a little storage alcove thing, a pretty built-in cabinet in the bathroom, a deep built-in medicine cabinet in the bathroom, two closets in the bedroom and another bigger closet in my office. However, two of the closets were a little quirky. Quirky in this case meaning not so practical. 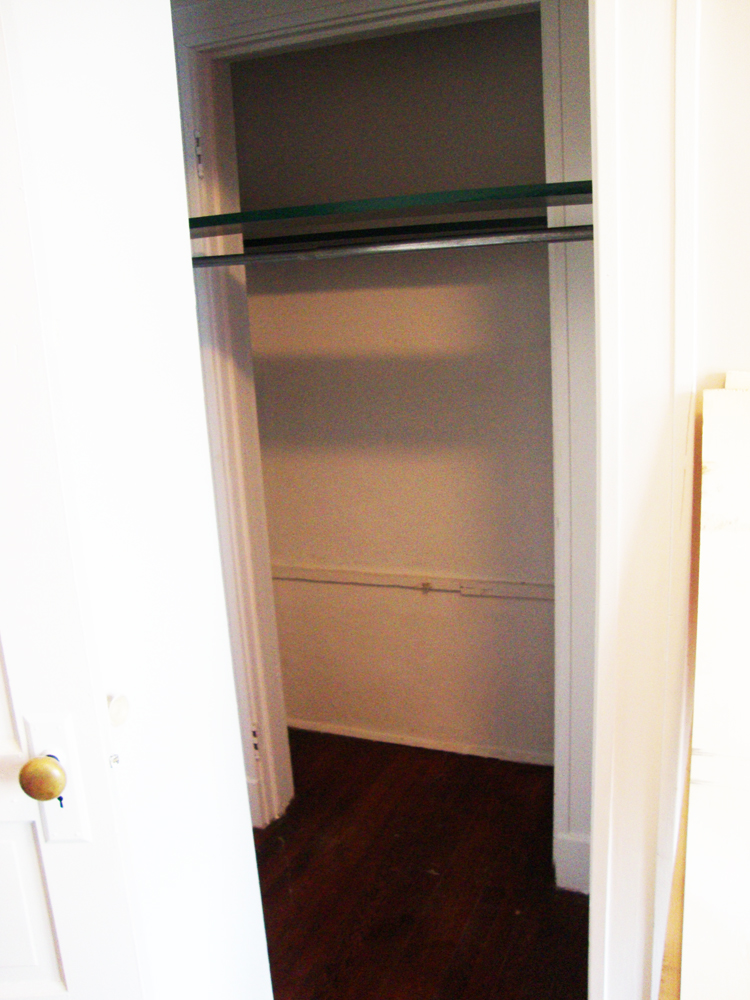 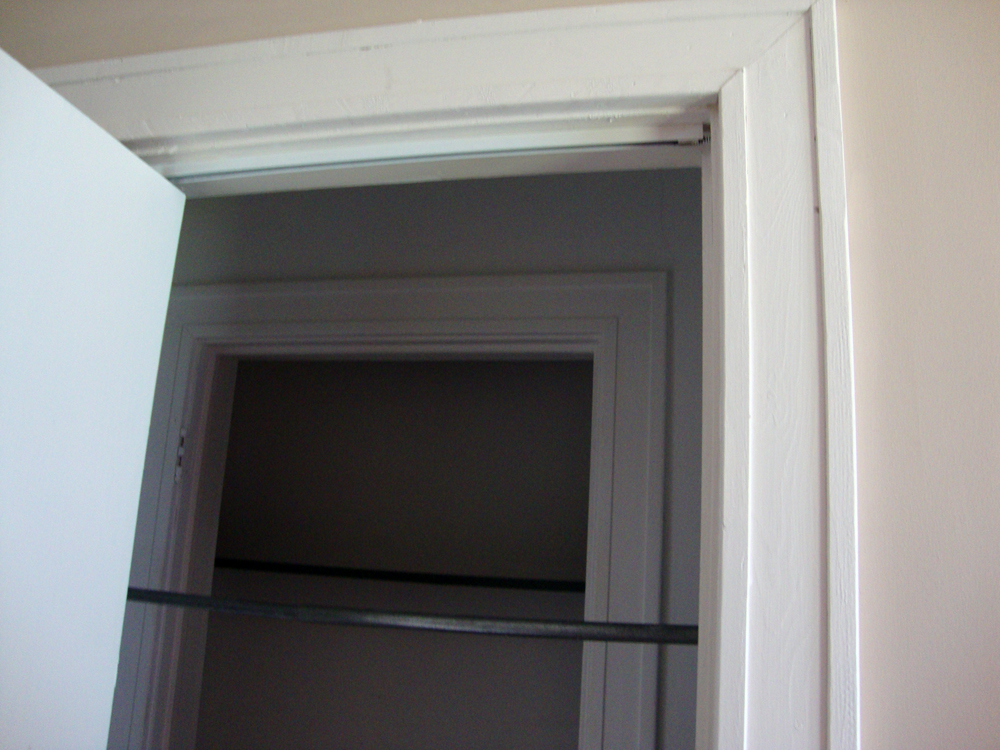 This is the closet in my office. I’ve heard of double names in the South, but double closets? Apparently, the original closet (the very back one) wasn’t big enough, so someone decided to expand it. Instead of tearing down the half wall area between the two spaces to make a nice walk-in closet, they left it creating two awkward spaces. 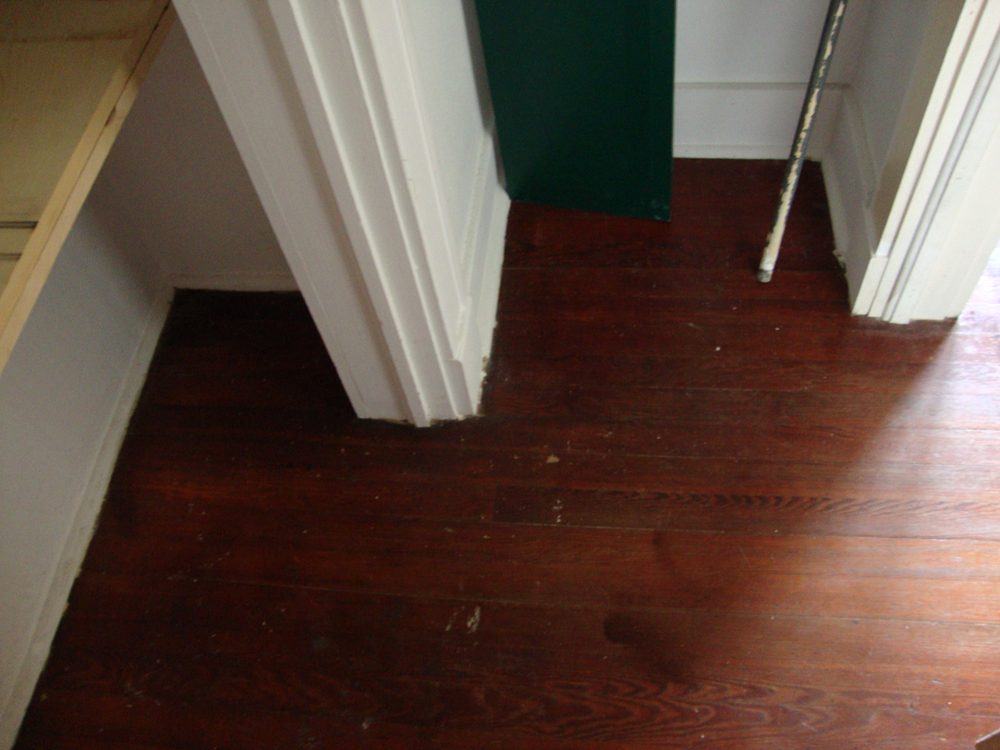 Even more awkward was the positioning of the shelves and hanging rods. You couldn’t even get to the back one and the front one was at the perfect level to knock you right in your forehead if you tried to reach toward the back one. 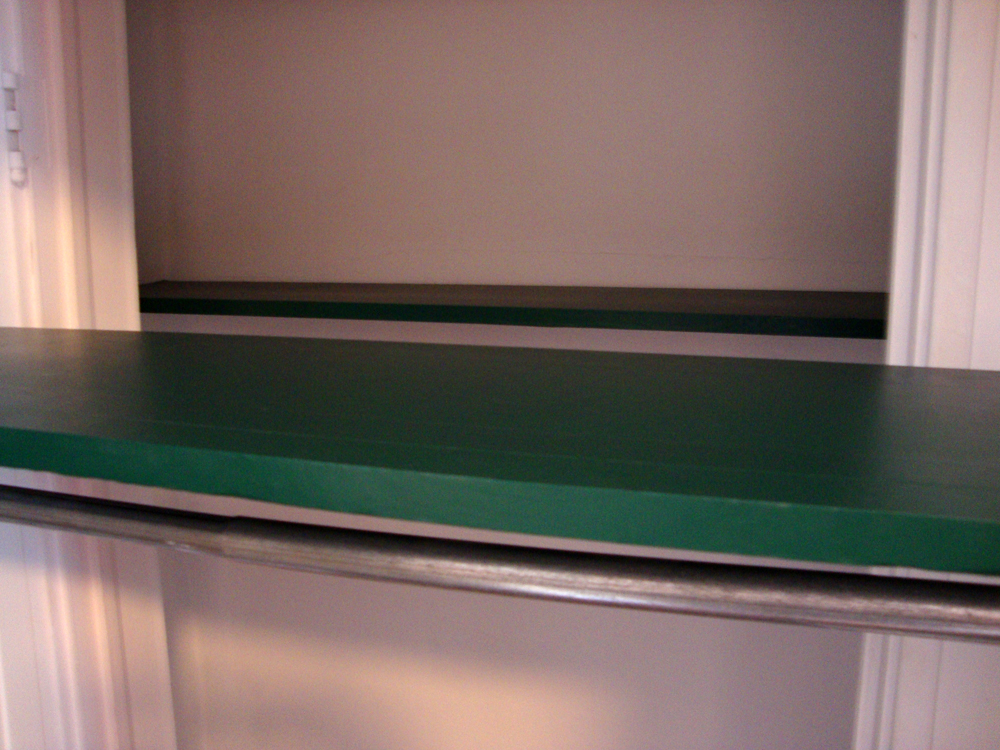 Before unpacking all my clothes, I wanted to give this space a little more practicality. I decided that we should add shelves to the back part of the closet to put stacks of sweaters, jeans or t-shirts or pretty boxes for extra storage. I also wanted to raise the bar and shelf in the front closet so that I didn’t hit my head on it every time I tried to reach in for a pair of jeans. 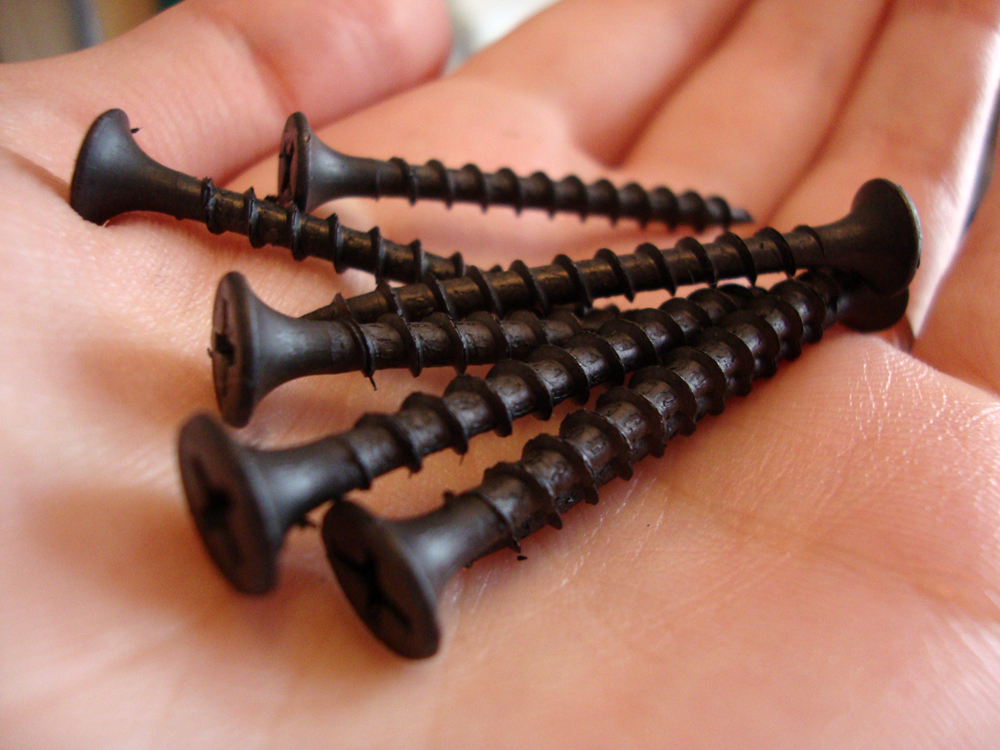 I took all the measurements for the shelves so that we could go to get wood cut and buy some other supplies when Drew got home from work. A quick trip to Lowe’s and we had our wood and some screws. 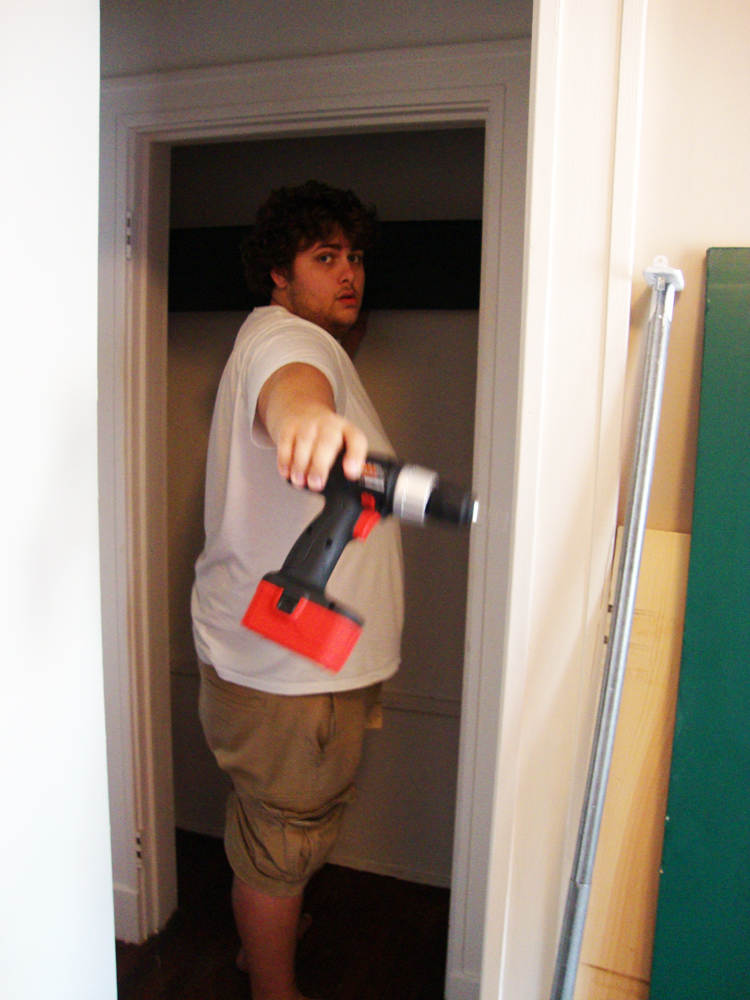 We didn’t have any power tools either, so we also had to get a drill. On a side note, I don’t know what it is with Drew and older women, but he gets hit on all the time by them. Even when I’m with him. I asked this lady in the hardware store about a drill they had in the ad, but that wasn’t on the shelves. Drew walked up and she was in mid-sentence talking to him about the other drills that were on sale and she couldn’t even get a sentence out without having to stop and tell him that he had beautiful hair and eyes. 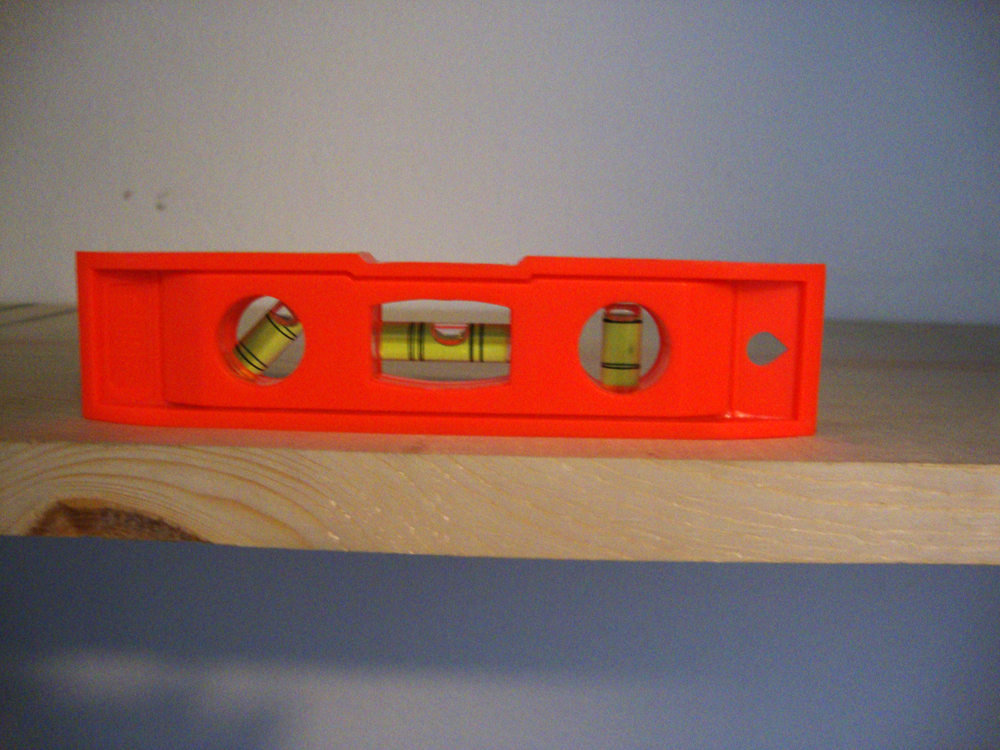 This project was pretty simple and only took about an hour or so to complete. We were sort-of lazy the whole time and really didn’t measure that much. I just had Drew hold the shelf up to about where I wanted it, we put the level on it until it was leveled, and I marked underneath it on the side walls for the supports. He made sure that the supports on both sides were level and we ended up pretty much right on every time. 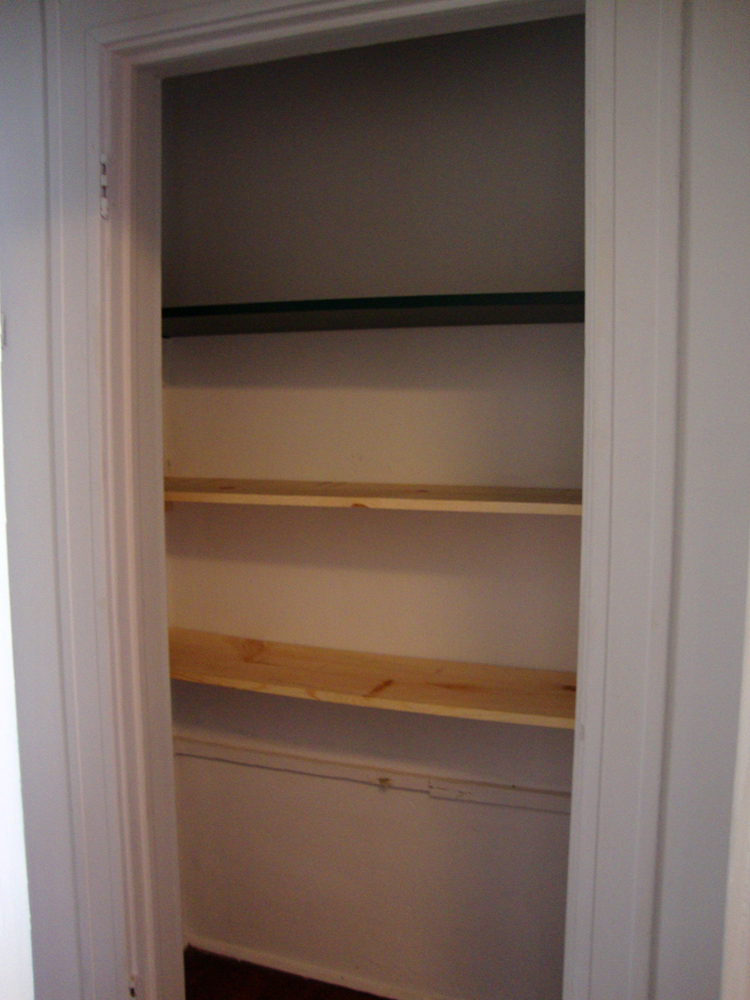 Pretty soon we ended up with three shelves in the back closet. (we left the top one where it was already) Then we moved the front closet’s shelf and hanging rod up farther. 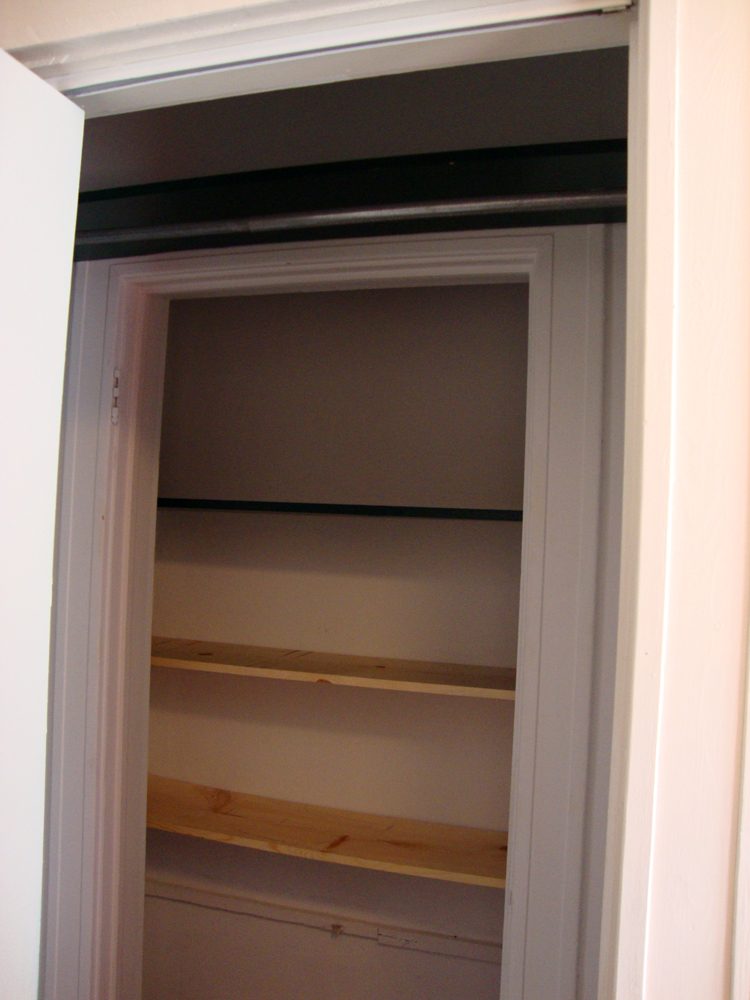 So much more practical! Now I have a walk-in closet! I have room to hang my clothes with storage on the shelf above them and then three more shelves in the back for more clothes and things! 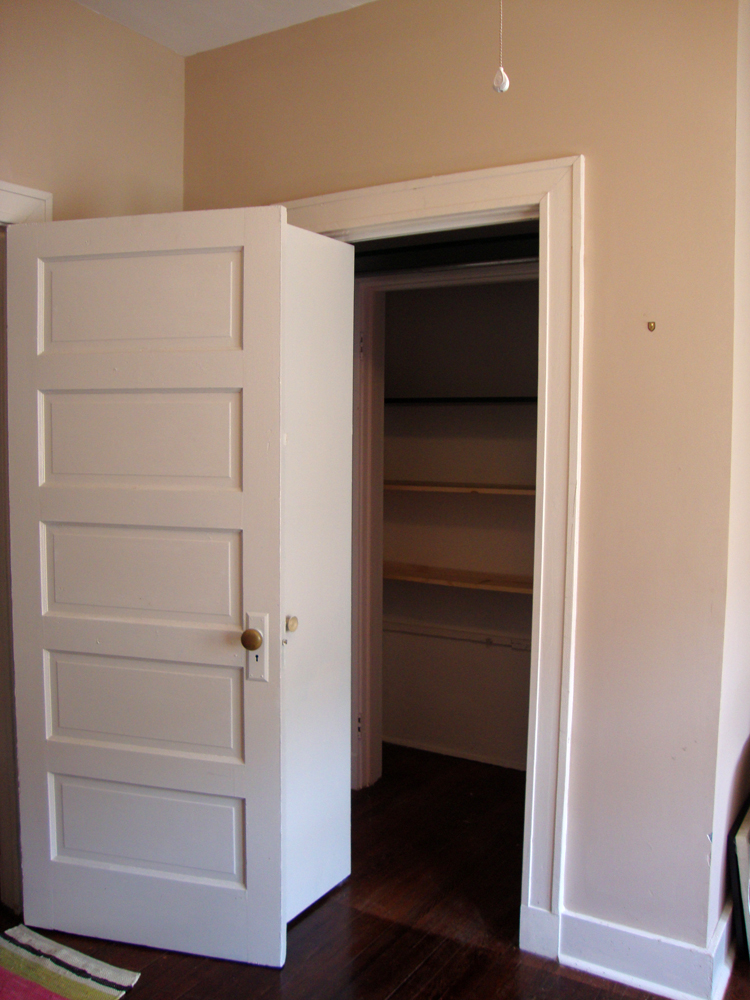 It also makes the closet feel so much bigger! 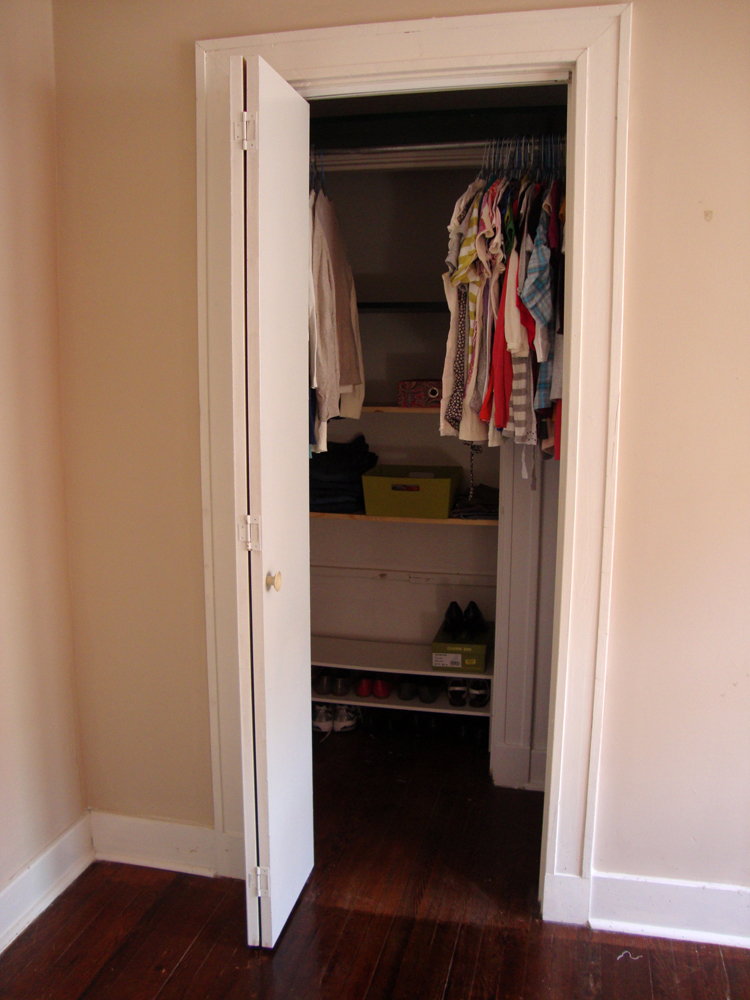 It is easier to see the changes once there are clothes in it. 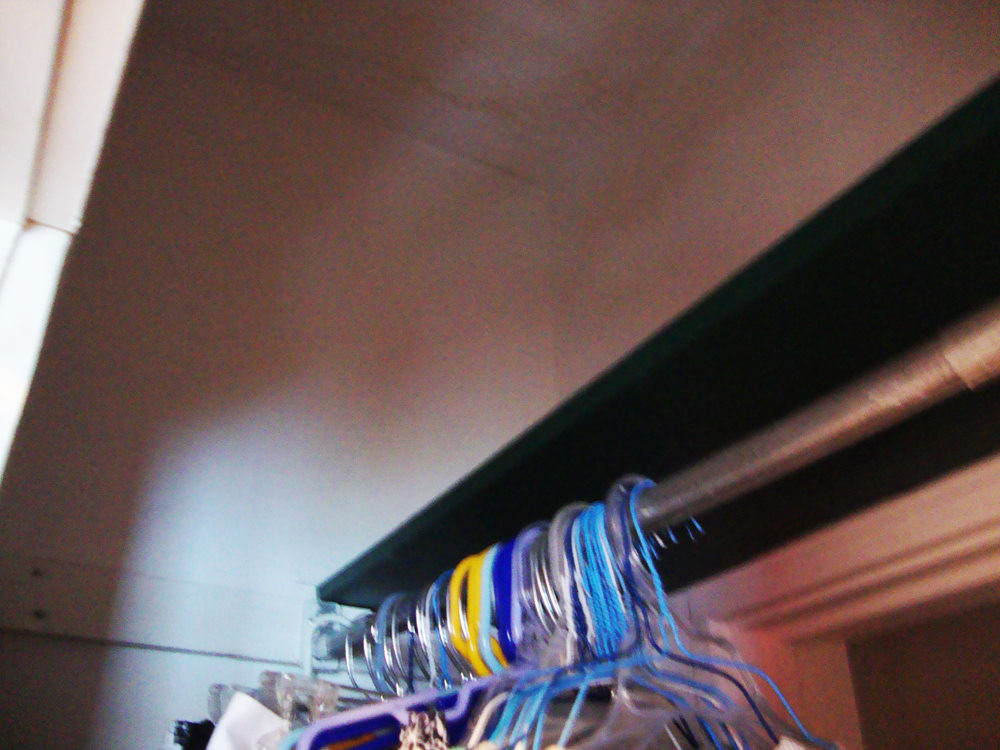 Even though the bar and shelf in the front are moved up higher, there is still plenty of room to store things on top of that shelf. It is nice to have tall ceilings! 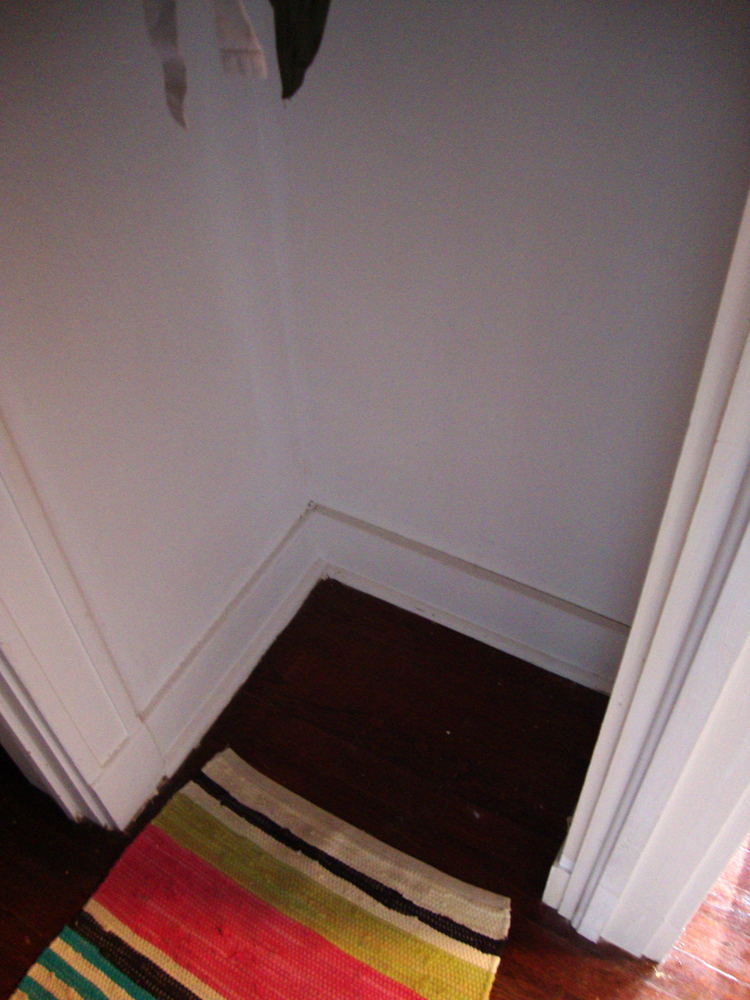 Plus, because the clothes are up a lot higher, there is even more room on the sides to put in more shelving if I wanted to. This would be great to store other smaller things. Shoes, purses, scarves… 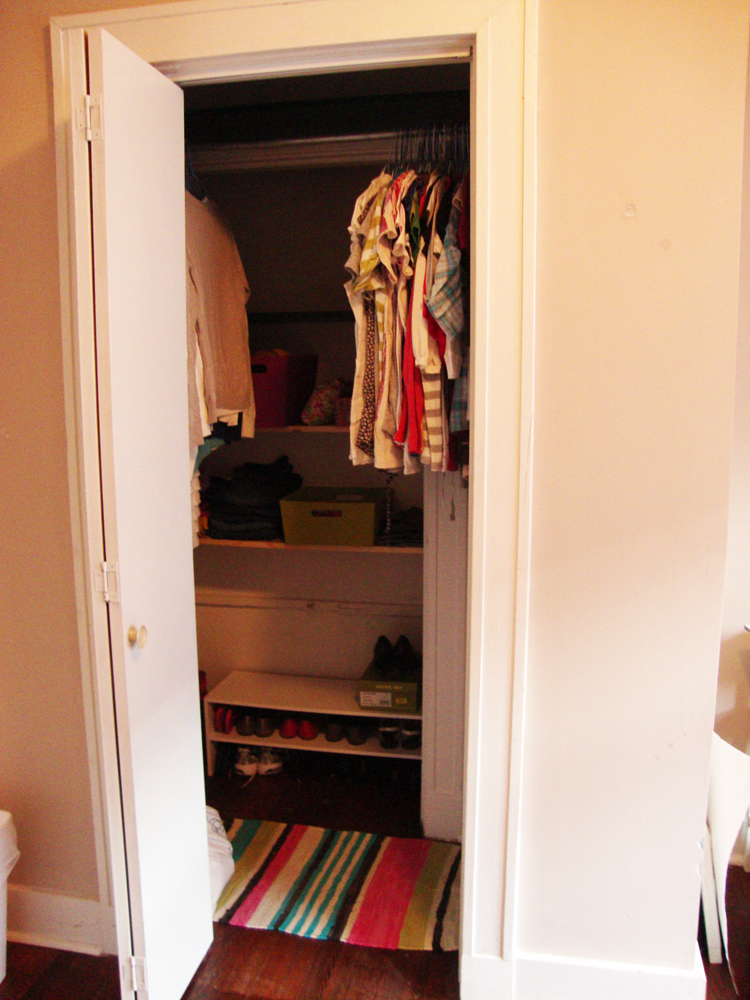 So much better!! But the fun doesn’t stop there! We still had another closet that needed our attention and this one was worse! 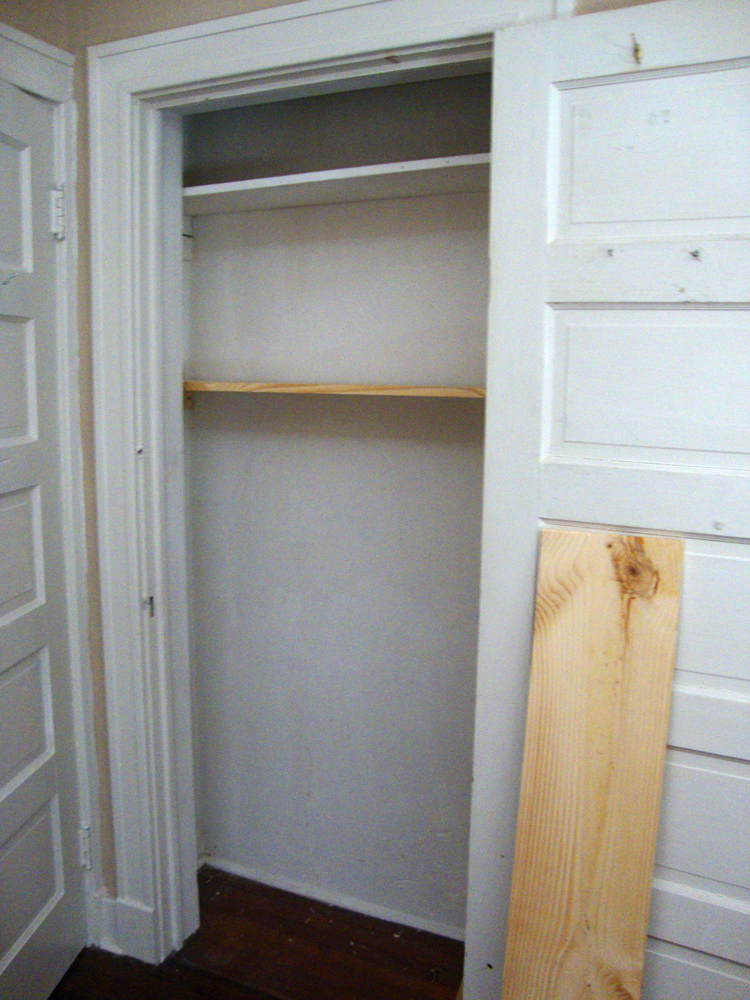 I forgot to take a picture of this closet before we put the first shelf in, but you get the idea. The top shelf in here was high enough that you wouldn’t hit your head on it and it also had a hanging bar as well. The problem was that this closet is less than a foot deep. That isn’t even enough room for a hanger! 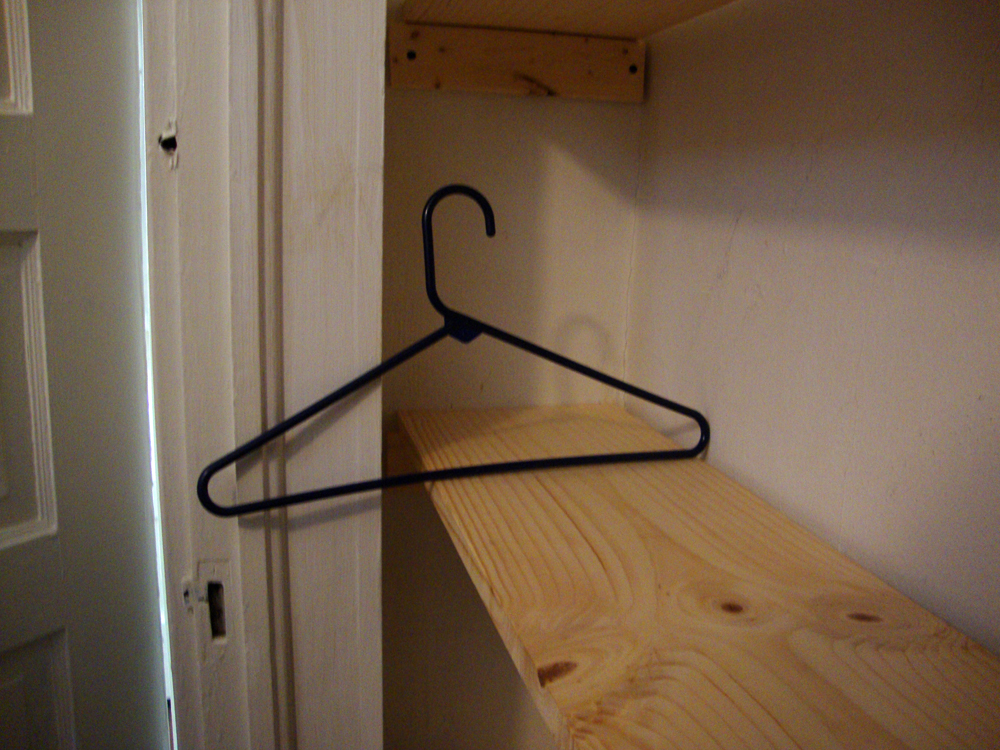 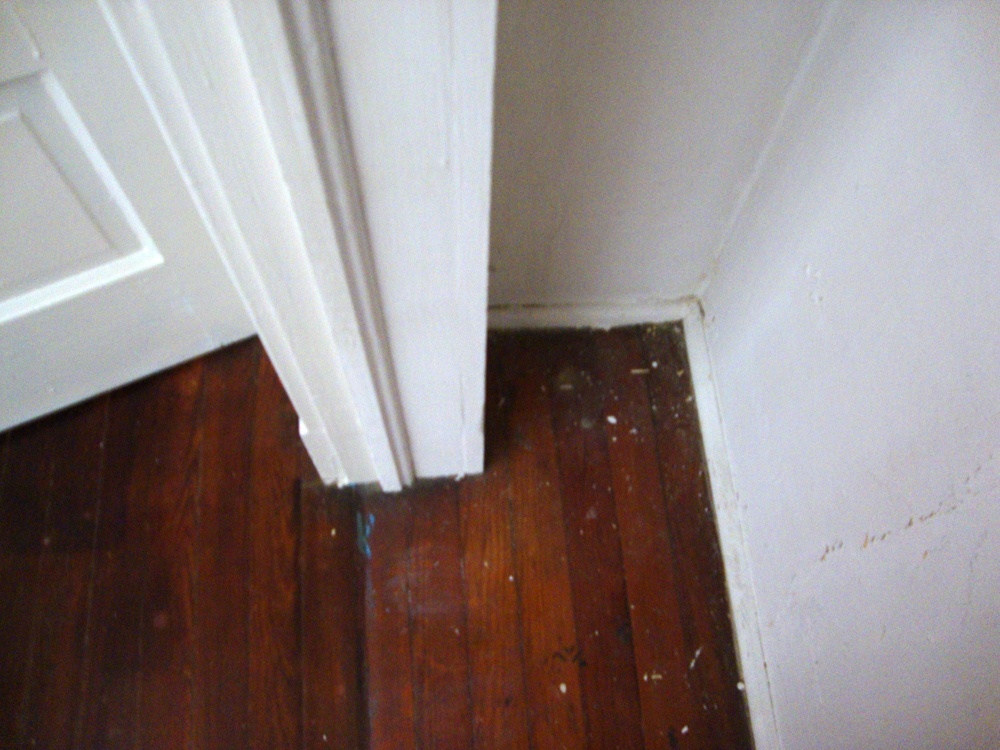 See how small it is? I don’t know what this was ever used for, but it was completely impractical as it was. However, we really needed a linen closet to store all of our extra bedding, sheets, towels, rugs, tablecloths, pillows, etc… Since this closet is in the bedroom right outside of the bathroom, it fit the bill perfectly. 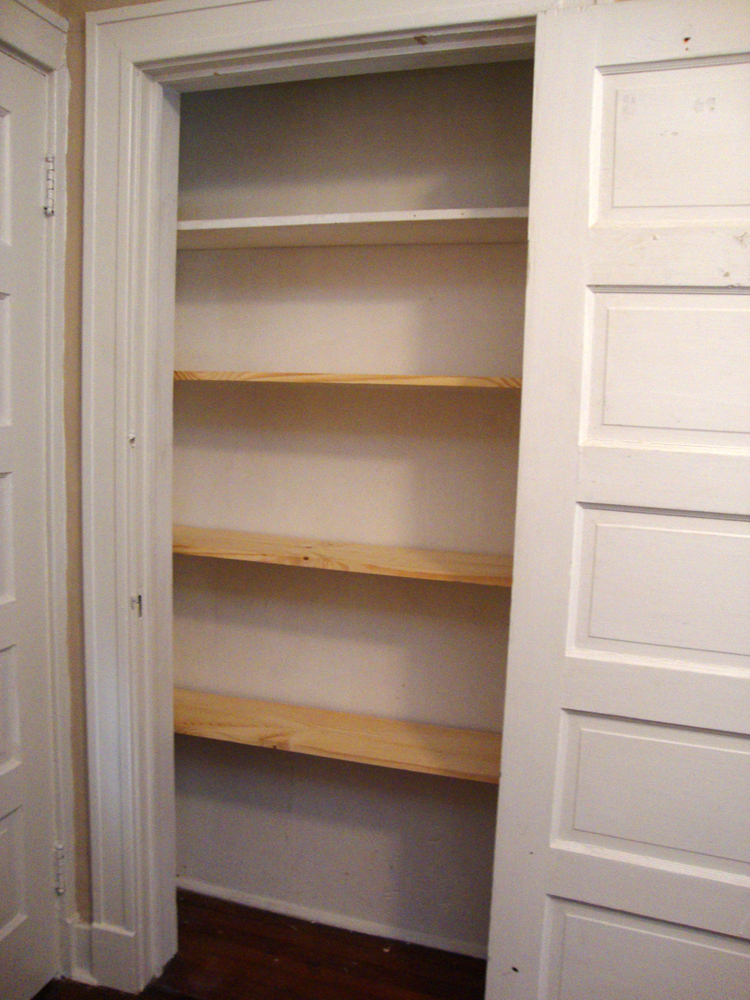 To keep this from being wasted space, we added three shelves and moved the top shelf that was already there down a little bit. 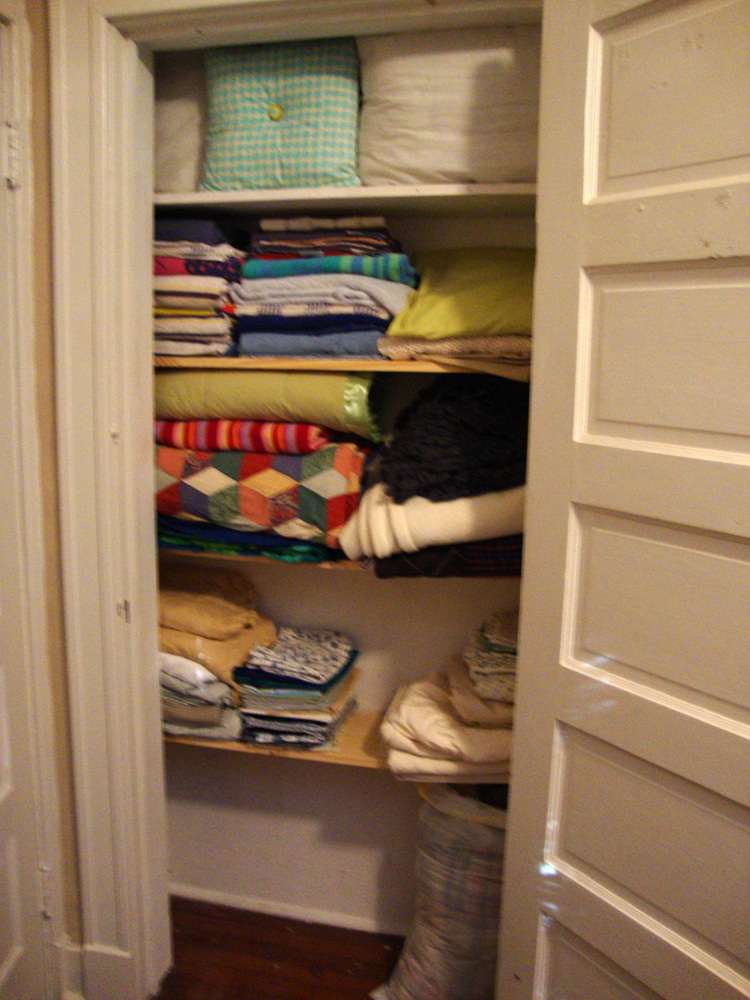 This one took a little longer, but just because the house is older and the walls were a little wonky and the wood length was a little tight in areas where the wall was bowed out. But in the end all the work was totally worth it. We wouldn’t have been able to unpack our boxes without this little linen closet. Look how full it already is! I’d have to say it was a pretty successful day and a pretty easy building project together. It is nice to see our little apartment already transforming into our little home. 🙂