For a New Year’s Resolution, or more so a resolution in general, Drew and I decided to be healthier people this year. We already are relatively healthy, but our main goals are to eat almost entirely a diet of fresh fruits and vegetables and get into a better exercise routine. With it just being us two that we are cooking for, it is relatively easy and not really any more expensive (or at least not much more) to buy fresh produce, as opposed to frozen or canned, but we rarely buy canned vegetables anyway. We have a bad habit of getting into a rut of eating the same foods over and over (green beans, broccoli, potatoes, etc.) and with so many things out there to choose from, why not eat a greater variety? We really don’t eat that many sweets or fats, our major downfall is eating too many carbs and comfort foods. (potatoes, biscuits and breads, rice, cereals, and all those other yummy starches) So we are cutting out as much as we can of all those things we don’t really need to eat and replacing them with double helpings of fresh fruits and veggies.

We also need to get ourselves out and move a little more. We get stuck sitting inside on the computer and studying so much that we don’t get enough exercise. Since I only have class three days a week, I’m going to try to use my school’s fitness center more and most importantly, we are going to start taking one or two long walks each week in the park or just down the neighborhood. This will be a good stress reliever from studying and give us time to chill and relax and think about things other than school and work. Maybe we can use it to talk through wedding ideas. 🙂 Anyway, I’ve been told that walking is the only exercise that rejuvenates your brain as well as your body. I’m not that great at running, but I love taking walks, so I’m really excited about this part of the plan. 🙂

I spent the day looking up some healthier recipes that we could make this week and researching things that I can get Drew to eat for quick and easy breakfasts. We went to the grocery store and got lots of fresh fruits, vegetables, meat, and healthy snacks (apples, strawberries, squash, zucchini, bananas, celery, tangerines, green beans, cherries, pineapple, and lots of other yummy things!) We also got a George Foreman Grill the other day to grill meat a bit healthier. 🙂

We made dinner tonight, and although it is something that we’ve made several times before, it is healthy, easy, fresh, and tastes great! 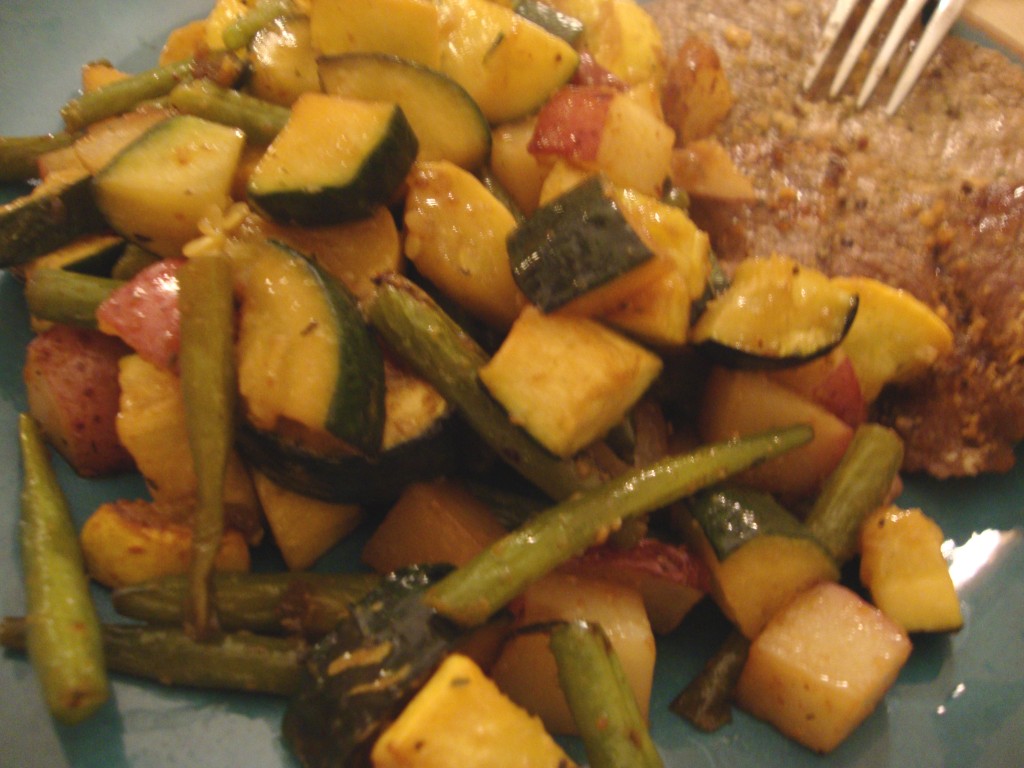 We cooked a steak on our George Foreman and split it so that we didn’t eat more than what a serving of meat should be (about the size of your fist). Then we took a small yellow squash, a small zucchini, 2 small red potatoes (and I did pick really small ones so that we didn’t have very many carbs), and a big handful of fresh green beans, all cubed up and baked in a pan with a little olive oil, herbs and salt. 🙂 Delish! I think I could have eaten an entire plateful of just the veggies!

I also made some homemade granola. I thought it would be good for Drew to snack on while driving to work in the mornings because he usually doesn’t eat breakfast at all because he is in a hurry. We are really trying to work on that because it is essential to get your metabolism up and running early to burn more calories during the day. 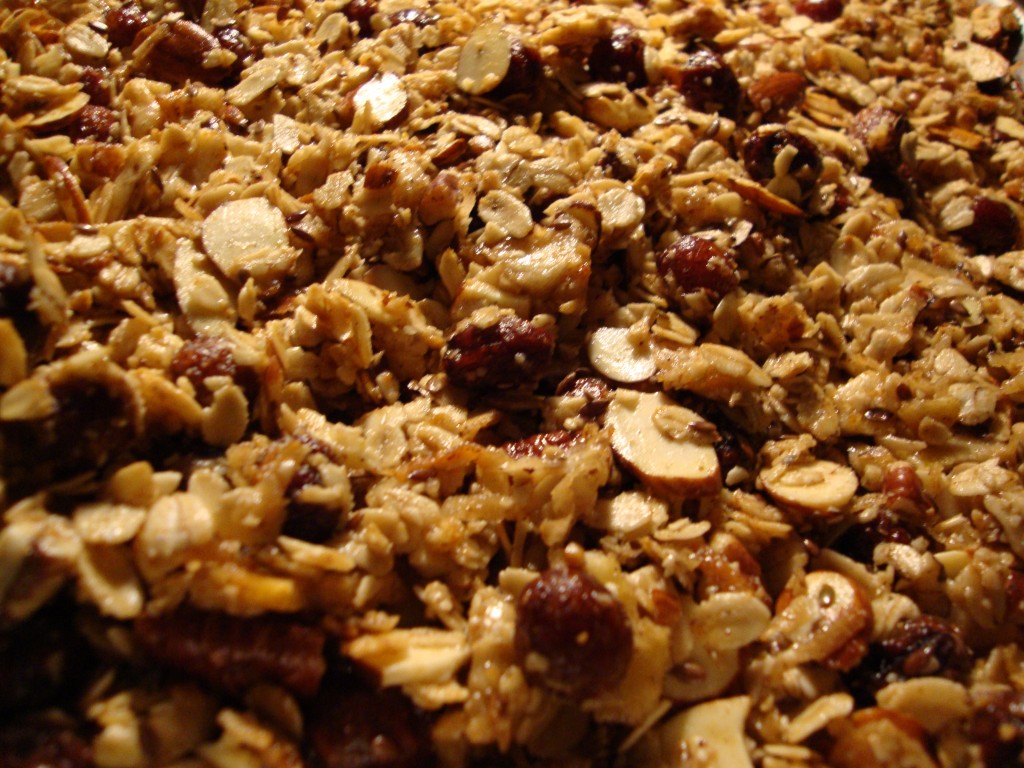 I, of course, love cooking things that I can throw everything-but-the-kitchen-sink into. So for the granola I put in oats, flax seeds, coconut, sliced almonds, chopped walnuts and pecans, raisins, broken up banana chips, honey and a little cinnamon. I used this recipe from Etsy’s Eatsy, but obviously threw in a few more things. It turned out really well! It smelled wonderful while cooking and tastes just as wonderful. Mine ended up a tad too salty, although I barely put any salt in it, so I added a little brown sugar to cut out a little of the salty taste. It also cooked quicker than it said it would, so watch the time and definitely stir it well several times while cooking. 🙂

If you would like some healthier breakfast ideas, here are some great ones. Here is also a little more info on why breakfast is so important.

Here’s to a new year of a fresher, healthier, better me. 🙂